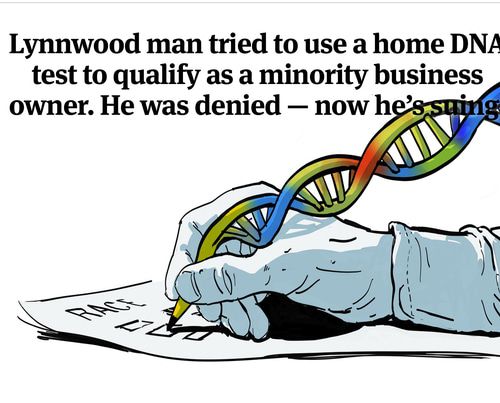 Lynnwood man tried to use a home DNA test to qualify as a minority business owner. He was denied — now he’s suing.

Ralph Taylor says it doesn’t matter what he looks like. Having lived most of his life as a white man, the 55-year-old now considers himself to be multiracial based on DNA test results.

The owner of Orion Insurance Group in Lynnwood also wants the U.S. Department of Transportation to recognize him as a minority so he can gain more deals providing liability insurance to contractors.

Taylor is suing Washington state and the federal government because he was denied a minority-business certification under a program created more than two decades ago to help level the playing field for minority business owners seeking contracts in the transportation industry. He provided no evidence he has suffered socially or economically because of race.

His case is pending with the 9th U.S. Circuit Court of Appeals.

In 2010 Taylor began identifying himself as multiracial after a DNA ancestry test estimated he was 90 percent Caucasian, 6 percent indigenous American and 4 percent sub-Saharan African.

He applied for state certification with the Washington Office of Minority & Women’s Business Enterprises (OMWBE) so Orion Insurance Group would be considered a minority business.

With no criteria defining a minority race or ethnicity, OMWBE eventually approved Taylor. But that same state agency, which also manages the U.S. Department of Transportation certification, decided he was Caucasian under that program’s procedures and denied his application.

Since then Taylor has pursued an unconventional legal path that raises questions about how the government determines who is and who isn’t a minority. Should it matter what a person looks like? Should they have to prove they’ve suffered discrimination? Can DNA tests prove race or ethnicity? And is Taylor taking advantage of a program by basing his identity on DNA results that some experts consider unreliable?

The OMWBE decides on a case-by-case basis who qualifies for both the state and federal programs it manages.

Gigi Zenk, former communications director for the office, said the programs are designed to provide minority business owners with equal access to contracts as a way of correcting persistent institutional discrimination.

“We work really hard to be fair, nothing is just black and white,” she said. “It’s never just one piece of evidence.”

Yet some who qualified for the program acknowledged they had never been disenfranchised. A Yakima man who qualified for both the state and federal programs said he is about 6 percent African American, looks Caucasian and has never encountered discrimination. Since 2014, the program has helped him win millions of dollars in contracts.