Of all the time bombs that Obama left to screw up the country, the deliberate implantation of foreign gangsters into America was arguably one of the worst (except the $10 trillion in debt run up of course).

That accusation is not an overstatement: the Washington Times reported on May 24, 2017, Obama admin knew gang members were part of illegal immigrant surge: Whistleblower. The “unaccompanied children” flooding north across the border a few years back included some truly dangerous characters to the point where American kids have been terrified to go to school because of the MS-13 gangsters now present. President Trump’s State of the Union speech included recognition of American parents whose children had been murdered by MS-13 gangsters.

One measure proposed to deal with Obama’s sabotage is Congressman Lee Zeldin’s bill to remove citizenship from foreign gangsters. 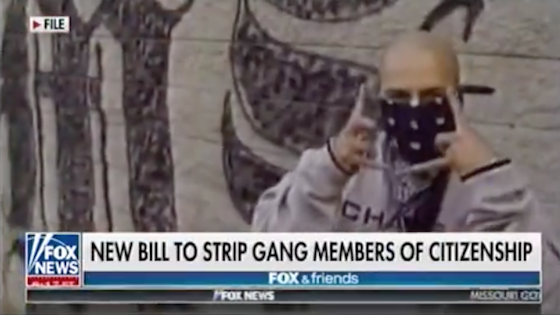 That topic was discussed when Jessica Vaughan of the Center for Immigration Studies appeared on Fox News recently:

STEVE DOOCY: This gang really burst into the American consciousness during the Obama years because of why?

JESSICA VAUGHAN: Yes the gang had been here before but definitely had a rebound during the Obama years because first of all, immigration enforcement declined in the interior of the country deliberately under the Obama administration. They they put restrictions on ICE officers on who they could arrest. And also during this time, there was this influx of illegal arrivals from Central America, mostly teenagers but also some families with kids who benefited from the catch-and-release policies that the Obama administration had in place, and they were resettled in places all over the country which happened to be those very same places where MS-13 has seen a resurgence. And the gang knew about the lenient policies and was deliberately taking advantage of them to build its ranks here and they’ve been on a horrific crime spree ever since.

DOOCY: No kidding, we’ve got some facts: 207 murders have been tied to MS-13 since 2012; 500 MS-13 members charged for major crimes since 2012 as well, and I understand that since January of 2016 there have been 17 people killed by MS-13. But here’s the thing, it’s hard to deport a lot of these people, Jessica, because they are in sanctuary areas.

VAUGHAN: That is a problem. We found about half of the cases we looked at took place in sanctuary jurisdictions, and these places are a magnet for illegal settlement and especially for transnational criminal organizations because they know that police are forced to look the other way at their immigration status they can’t work with ICE, so it’s that’s a great deal for them. It gives them sanctuary.

DOOCY: You’ve got to like the proposal by Lee Zeldin, the congressman from the great state of New York. He’s introduced the Protecting Our Communities from Gang Violence Act. It would revoke the citizenship of people who acquired citizenship and who’re involved in a gang like MS-13. Does this bill have a chance to make it to the President’s desk?

VAUGHAN: I think it might because the House is going to hopefully be moving on some good immigration legislation, the Goodlatte bill, Securing America’s Future Act, and I think it’s important to include this provision to denaturalize gang members. We don’t want them being citizens if they benefit from an amnesty or marry an American citizen. It’s a good tool for immigration to have and there may be a way to do that.

For more about the CIS investigation of MS-13 infiltration into America, see its report, MS-13 Resurgence: Immigration Enforcement Needed to Take Back Our Streets.