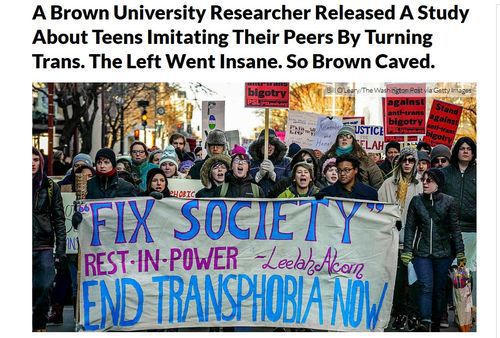 Recently, I linked to a surprisingly lucid press release from Brown U. promoting the important research of Brown professor Lisa Littman into the recent epidemic of what she calls “Rapid Onset Gender Dysphoria,” in which unhappy adolescent girls, instead of dressing Goth or cutting themselves or turning anorexic or whatever, announce to their parents that they, just like all their friends, have always been a boy on the inside, despite ample evidence from their girly childhoods to the contrary, and demand to be permanently sliced up.

Not surprisingly, Brown U. has already cravenly collapsed. From News from Brown:

Following the decision to remove a news article on “rapid-onset gender dysphoria,” the University issued the following statement, and the School of Public Health dean wrote to Brown’s public health community.

PROVIDENCE, R.I. [Brown University] — On Aug. 22, 2018, Brown University published a news story detailing a study in the journal PLOS ONE on “rapid-onset gender dysphoria.” On Aug. 27, Brown removed the article from news distribution and issued the statement below regarding the decision to remove the article.

On Aug. 28, Brown University School of Public Health (SPH) Dean Bess Marcus addressed the topic in a letter to the SPH community. The text of that letter is included below the statement.

In light of questions raised about research design and data collection related to Lisa Littman’s study on “rapid-onset gender dysphoria,” Brown determined that removing the article from news distribution is the most responsible course of action.

As a general practice, university news offices often make determinations about publishing faculty research based on its publication in established, peer-reviewed journals considered to be in good standing. The journal PLOS ONE on the morning of Aug. 27 published a comment on the research study by Lisa Littman, who holds the position of assistant professor of the practice of behavioral and social sciences at Brown, indicating that the journal “will seek further expert assessment on the study’s methodology and analyses.” Below is the comment posted on the study in the journal PLOS ONE:

“PLOS ONE is aware of the reader concerns raised on the study’s content and methodology. We take all concerns raised about publications in the journal very seriously, and are following up on these per our policy and COPE guidelines. As part of our follow up we will seek further expert assessment on the study’s methodology and analyses. We will provide a further update once we have completed our assessment and discussions.” — PLOS ONE August 27, 2018

Dear Members of the Public Health and Brown Community,

… Independent of the University’s removal of the article because of concerns about research methodology, the School of Public Health has heard from Brown community members expressing concerns that the conclusions of the study could be used to discredit efforts to support transgender youth and invalidate the perspectives of members of the transgender community.

The University and School have always affirmed the importance of academic freedom and the value of rigorous debate informed by research. The merits of all research should be debated vigorously, because that is the process by which knowledge ultimately advances, often through tentative findings that are often overridden or corrected in subsequent higher quality research. The spirit of free inquiry and scholarly debate is central to academic excellence. At the same time, we believe firmly that it is also incumbent on public health researchers to listen to multiple perspectives and to recognize and articulate the limitations of their work. This process includes acknowledging and considering the perspectives of those who criticize our research methods and conclusions and working to improve future research to address these limitations and better serve public health. There is an added obligation for vigilance in research design and analysis any time there are implications for the health of the communities at the center of research and study.

The School’s commitment to studying and supporting the health and well-being of sexual and gender minority populations is unwavering. Our faculty and students are on the cutting edge of research on transgender populations domestically and globally.

The commitment of the School to diversity and inclusion is central to our mission, and we pride ourselves on building a community that fully recognizes and affirms the full diversity of gender and sexual identity in its members. These commitments are an unshakable part of our core values as a community.

Commitments to science … not so much.

All minorities are equal, but some minorities are more equal than others, especially the self-proclaimed transgender, who, let me tell you, some of whom can be a handful for sheer aggression and relentless hostility toward science.