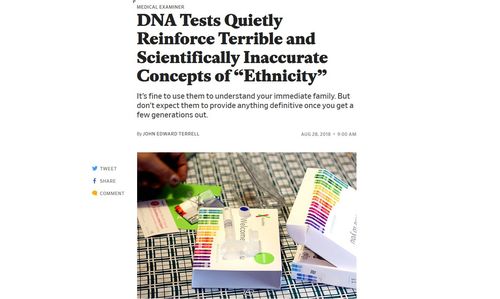 It’s fine to use them to understand your immediate family. But don’t expect them to provide anything definitive once you get a few generations out.

Dr. Terrell is the Regenstein Curator of Pacific Anthropology at the Field Museum, Chicago.

… What worries me most, however, is that companies offering personal genetic testing customarily seem to report back to those sending along a sample of their spit that they are a mix of different “ethnicities.” This is more than simply statistical nonsense. I fear doing this can also be dangerous. Claiming that it is possible to map ancestry in this fashion may be giving discredited old ideas about ethnicity and race new visibility.

… We inherit roughly half our genes from our mothers and half from our fathers. If one or both of them should be unknown to you, it is a safe bet gene profiling may help you track them down. But how far back across the generations can you go and have similarly assured success? Go back, say, five more generations to your great, great, great, great grandparents. Assuming there hasn’t been a lot of inbreeding in your ancestry (the further you go back in time, by the way, the more likely it occurred),

Indeed. If you go back a mere 40 generations to roughly the time of Charlemagne, you have over a trillion slots in your family tree. But there weren’t a trillion human beings alive then, so, self-evidently, your ancestors were inbreeding genealogically: not in the sense of marrying their siblings, but of marrying people who were distant relations of them, typically through multiple pathways. Who did they marry? Generally other people in the same geographic area.

you should have 64 of them. Only about 1.56 percent of your genes may come down to you from any one of these 64 ancestors. Good luck should you go looking for them many generations back—or their living descendants.

Now go even further back in time to the 17th or 18th century. The number of folks on average living then who could have contributed to your genetic endowment is so large (more than 1,000), and their possible genetic contribution so small (about 0.098 percent for 10 generations back), it would be smoke and mirrors to assert claims about who they were in person. In fact, most of these people left no trace of themselves in your genome.

In short, while it can be hard to get your head around the statistics involved, go back more than a few thousand years and you are genealogically related to almost everyone on Earth.

Perhaps. But you are definitely more related to some people than you are to other people.

Genetically speaking, however, very few of these very distant ancestors contributed something of themselves biologically to your genome.

Conception is a little bit like a child trying to shuffle a deck of cards: the genes get reshuffled in clumps, which means you might share something striking in common with one ancestor (e.g., I know somebody who has virtually the same taste in foods as his maternal grandfather). On the other hand, over enough generations, the likelihood of you receiving any clumps of autosomal DNA from a particular ancestor drops to a pretty low percentage. (For sex specific traits, you have to be in the all male or all female lines.)

For example, Senator Elizabeth Warren is out around the periphery of where a DNA test could falsify her claim to be part American Indian. If a DNA test showed she had some American Indian-only DNA, that would prove she had an American Indian ancestor. On the other hand, if the DNA test reported that she didn’t have any AI DNA, that would probably suggest her contribution of “Native American” recipes, such as favorite seafood dish of Cole Porter’s, to the cookbook Pow Wow Chow was not genetically justified. On the other hand, being five generations out from the claimed interbreeding event, there’s a small chance that a negative result would just be bad luck for her, not due to the fault of the test, but due to how her genes got reshuffled over the generations. Beyond ten or so generations out, the odds get pretty high that you don’t have any distinct DNA from a single ancestor in particular.

What this means is that the kind of random unlikely ancestor that the Conventional Wisdom tends to obsess over probably has zero genetic influence on you. For example, say that you are a Chinese person born in China, but one of your ancestors 25 generations ago was Marco Polo, but all your other ancestors going back 1000s of years were East Asians.

Does that mean you aren’t pure East Asian genetically but are instead an Italian-Chinese hybrid?

In the Marco Polo example, the odds are that you didn’t actually inherit any clumps of DNA from Italians. On the other hand, there’s a tiny chance that you have some specific Italian clump of DNA.

Given all this, it is hard for me to understand why the results sent back to clients by commercial genetics laboratories are commonly reported as “ethnicity estimates” expressed as percentages adding up to 100 percent. For example, you might be told you are something like 48 percent West European, 27 percent Scandinavian, 9 percent Irish/Scottish/Welsh, 7 percent Finnish/Russian, 4 percent British, 3 percent East European, and 2 percent other.

These figures are derived by statistical comparison with the genetic profiles of “reference” samples of individuals thought (by those in the laboratory working on your spit or swab) to be “native” to this or that region of the world.

However, and here is the main point, you can be native to a place (in the sense that you and your relatives have lived there for a long time) without being genetically typical or “representative” of that place.

But doesn’t that contradict Dr. Terrell’s recurrent point that sexual congress tends to mix ancestries? Clearly, there are peoples today who have avoided interbreeding with their geographic neighbors over the centuries to remain somewhat genetically distinctive (e.g., Roma in Europe, many subcastes in India). But then are also many other peoples who tended to mate with their geographic neighbors (e.g., Germans, Japanese) without all that many ultra-rigid rules separating groups … other than the practical one of the tyranny of distance.

One reason is the geographic mobility of people throughout human history.

The Geographic Mobility glass is part full and part empty. For example, to take Dr. Terrell’s field of expertise, Polynesians had enough geographic mobility to spread to parts of the Pacific as far flung as New Zealand, Easter Island, and Hawaii. But this was an amazing accomplishment of which today’s Polynesians are rightfully proud (the recent Clement-Musker Disney princess movie Moana allegorizes Polynesian settlement of the Pacific to space exploration). Polynesians were the only human beings, so far as we know, to reach those places until after 1492.

Another, and perhaps less obvious, reason is the mobility of our genes. Thanks to the time-honored practice of sexual intercourse, genes can spread far and wide, even if the individuals involved don’t. Given enough (generational) time, as well as the pleasurable human motivations involved, genes can travel the globe.

At this point I suspect you may be saying to yourself something like: “But wait a minute, isn’t it true that until recently humankind was subdivided into separate tribes, populations, races, or subspecies that only began to meet and mix after Columbus found the New World in 1492?”

If that is what you are thinking, here’s my answer: No, it isn’t true, even if lots of people nowadays continue to believe that once upon a time human beings existed on Earth in different varieties generically called “races.”

People don’t live in cages. As an anthropologist who has worked in the South Pacific for more than half a century, I know firsthand that all of us are linked with one another far and wide in enduring social networks that—more often than not—pay scant attention to even seemingly insurmountable differences in language, wealth, social standing, and the like.

When it comes to having friends and making love, there has always been a will and a way, regardless of any borders or boundaries.

I look forward to seeing Dr. Terrell, an expert in Pacific anthropology, explain to a meeting of large, imposing Native Hawaiians that their legal claim that their ancestors were living in Hawaii before the white man (e.g., Captain Cook) arrived is outdated and unscientific even though it has been repeatedly vindicated by 21st century DNA testing. Then, he can go tell a Maori club in New Zealand that their claim that their ancestors were in New Zealand before the white man is anti-scientific and racist too.

This is why I worry that by reporting their laboratory results as “ethnicity estimates,” companies may be giving their clients misleading fuel for potentially harmful racial (and racist) beliefs.

How can you tell which scientific ideas are Bad Ideas? Because Bad People hold them.