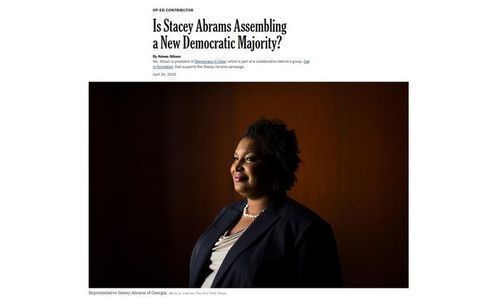 "Mirror, Mirror on the Wall, Who's the Intersectionalist One of All?" Democrats Rebrand Themselves As The Black Party

Ms. Allison is president of Democracy in Color and the author of the forthcoming “She the People.”

When early voting begins today in the Georgia primary campaign for governor, Stacey Abrams, the former minority leader of the Georgia House of Representatives, may very well take a momentous step closer to becoming the first black woman in the nation to be elected governor.

Ms. Abrams will have entered that office lifted by the political power of a multiracial coalition led by the Democratic Party’s most powerful voting bloc, black women. Ms. Abrams’s Georgia campaign represents the first time a statewide candidate is embracing the political hopes and dreams of black women — who make up a whopping 30 percent of the Democrats in the Georgia primary (held on May 22) — as the engine of its campaign.

If successful, Ms. Abrams’s strategy and approach will establish a political precedent in the South and will subsequently offer Democrats a way to win in Republican strongholds in many parts of the country. …

By insisting on the strategy of appealing to white Republican and moderate voters, Democrats have lost over and over again with a population that is nearly a majority of people of color — specifically, voters of color who make up nearly half of the Democratic Party membership in Georgia and nationally. Even casual observations of these numbers and trends would indicate that Democrats do not need to persuade a single Trump voter to win.

The Abrams idea — that black women leading a multiracial bloc of voters will establish a new base — may also revolutionize American electoral politics. The math is clear: Black voters are a quarter of Democrats, and black women have the highest turnout. If Ms. Abrams advances from the Democratic primary to the general election for governor of Georgia, her multiracial base stands the best chance at turning Georgia blue.

Back in 2009 I pointed out that the Democrats wanted to brand the Republicans as the white party with themselves as the nonwhite party.

In 2008, McCain let Obama position himself to blacks as the black candidate, to other nonwhites as the nonwhite candidate, and to whites as the postracial candidate. Yet, unless treated as timidly as McCain handled his opponent in 2008, a black-led four-race coalition is an inherently fragile thing. …

But let's be realistic. Being, in essence, the white party makes the GOP uncool. And that's only going to get worse as the impact of decades of indoctrination in the uncoolness of white people by the school system and Main Stream Media continue to pile up.

Further, contra Karl Rove, the GOP will never be able to shake its white party image. It will either increase its share of the white vote or it will go out of business as a party capable of winning national power.

My suggestion: the only long-term option for the Republicans, the de facto white party, is to rebrand the Democrats as the de facto black party.

Not the Minority Party or the Cool, Hip, Multicultural Party—but the Black Party. Go with the flow of the fundamental Manichaeism of American thought: Black versus White.

Sure, it's kind of retarded, but Americans, especially American intellectuals and pundits, aren't good at thinking in terms of shades of brown. You can't beat it, so use it.

Black or white: choose one.

Or they can not choose and stay home on Election Day.

The subtle cunning of the tactic of rebranding the Democrats as the black party is not to criticize the Democrats for being the vehicle of African-American political activism, but to praise them for it, over and over, in the most offhand "everybody-knows" ways.

Don't argue it. Just treat it as a given.

Moreover, Republican rhetoric should encourage feelings of proprietariness among blacks toward their Democratic Party. It's not all that hard to get blacks to feel that they morally deserve something, such as, for example, predominance in the Democratic Party. African-Americans are good at feeling that others owe them deference.

This kind of subtle language, casually repeated, puts Democrats in a delicate spot. Either they insult blacks by denying this presumption, or they alarm their Asian, Hispanic, and white supporters by not denying it. As everybody knows, but seldom says, black political control hasn't worked out well for places as far apart as Detroit and Zimbabwe.