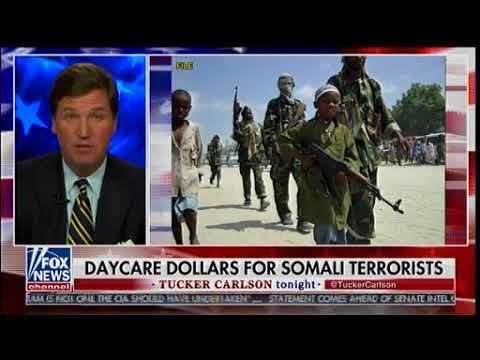 Somali values are made clear by a major case of fraud now being reported: fake daycare businesses were set up to bilk the government of cash which is then carted off by the millions in suitcases to Somalia to fund Al Shebaab, a regional jihadist group. Tucker Carlson had a succinct report on Tuesday:

TUCKER CARLSON: Millions of taxpayer dollars may have been used to fund terrorists in Somalia; that’s according to a new report by a Fox affiliate in the Twin Cities. According to that story, many members of Minnesota’s Somali immigrant community have discovered they can open sham daycare centers that only pretend to watch children, collect a fat subsidy from the state for doing that and keep the change. They’ve make millions of dollars, up to a hundred million according to that report: that would be half of Minnesota’s annual budget for child care assistance. Again, these are people who were resettled here as an act of charity by our country, accused now of defrauding our country. And not just fraud — fraud so brazen the report says that Somalis buy shares in fake daycare outlets just to get a cut of it.

Some of this fraudulently obtained money is reportedly being shipped back to Somalia in suitcases full of cash to evade federal wire transfer restrictions some of this money is ending up in regions of Somalia controlled by the Islamic terror group Al Shabaab. . .

The Shabaab jihadists are a rough bunch, and millions of dollars can buy lots of weapons to murder infidels and disobedient muslims.

A report from the local Fox9 compiled from months of investigation found that $100 million was carried out of the Minneapolis-St. Paul airport in 2017 (Millions of dollars in suitcases fly out of MSP, but why?):

Powerline blogger John Hinderaker asked Is This The Worst Scandal In Minnesota History?

Before Somali immigration, Minnesota had a reputation as a friendly and law-abiding state, so $100 million stolen from the state’s taxpayers for child care comes as a shock, although muslim crime has been an ongoing theme there for years. The fraud certainly blows up the diversity narrative that liberals worship.

One news report from the Pioneer Press was eye-catching because of its raw emotion on display — it could have been written by a high school student:

It doesn’t look like all of that is true — but parts of it are.

There’s a lot of smoke — and a lot of fire — around this story, which KMSP-TV broke this week and has sent lawmakers and bureaucrats at the state Capitol into action. And these actions and reactions have been all over the place, ranging from hunkering in echo chambers to demanding answers to pouncing on red political meat to, well, everything in between.

It’s hard to keep track — and easy to get the facts wrong. Let’s try.

Why the shock? Somalis have been leaving Minnesota for years to fight for jihad in their ancestral homeland — why wouldn’t they transport stolen dollars to Somalia for the same purpose?

Of all immigrant groups, Somalis are arguably the worst because they are actively hostile to assimilation, even though great efforts have been made by extra-nice Minnesotans.

America has been swilling immigration poison via Somalis for too long, so it’s time to admit failure and just stop importing trouble.