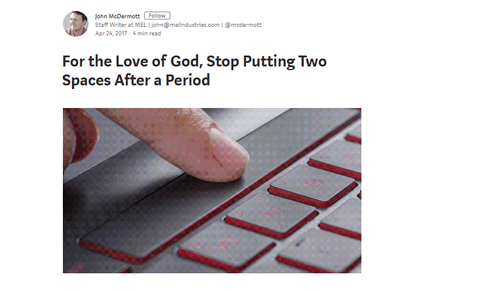 Radio Derb Transcript Up For May 11— The War Between One-Spacers And Two-Spacers, Etc.

The Radio Derb Transcript is up for May 11—go here to read or listen. Sample:

Transgender bathrooms, race and IQ, gay marriage, open borders, … You think these are topics of angry controversy on the internet? Feugh! Let me show you something people are really mad about.

The point at issue here is: Do you type one space after a period, or two?

If, like your genial host, you learned to type on a mechanical typewriter, one of those that dings a little bell to prompt you for a carriage return [sound clip], one of the rules you were taught was to double-space after a period or a colon.

(I should say, for the sake of complete coverage, that there is a school of thought that says you should double-space after a comma or a semicolon, too. This is wrong! Do not listen to these people! The paths of error are many; all lead to perdition! Strait is the gate, narrow is the way!)

Since computers with word processors came up, and I think particularly since proportional fonts became widely available, these fine old civilized standards have been slipping into desuetude. We of the older generation have striven to keep the flame of typographical correctness burning, but our efforts have been looking more and more like a rearguard action …

… until April 24th this year — blessed day! — when the website of the scholarly journal Attention, Perception, & Psychophysics published a paper titled "Are two spaces better than one? The effect of spacing following periods and commas during reading."

I am sorry to see the reference to commas in that title, but the paper itself validates what we former typewriter users have always known: Leaving two spaces after a period makes your text easier to read. They ran tests with students at Skidmore College in upstate New York, and found that reading went three percent faster with two spaces.

Defenders of tradition and sanity — Yale sociologist Nicholas Christakis, for example — hailed the study as confirming what right-thinking people have always known.

The forces of anarchy and chaos, however, are not easily repelled. Some creature named Farhad Manjoo over at Slate.com launched a 1,300-word piece with the declaration that, quote: "Typing two spaces after a period is totally, completely, utterly, and inarguably wrong."

John McDermott at the lifestyle website MelMagazine.com was even more shameless, descending into actual blasphemy. Title of his piece: "For the Love of God, Stop Putting Two Spaces After a Period." That ranted on for eight hundred words.

Meanwhile Jennifer Gonzalez at CultOfPedagogy.com folds the controversy into the larger war against Boomers. Her title: "Nothing Says Over 40 Like Two Spaces after a Period!"

Reading these furious polemics, it seems plain to me that the war between One-Spacers and Two-Spacers will come to blood at last, like the conflict in Gulliver's Travels over whether you should crack a boiled egg at the big end or the little end.

That one ended with victory for the Little-Enders, if memory serves. I am confident that victory in the typing wars will ultimately come to us, the Two-Spacers.

Then we shall have a free hand at long last to deal with the comma and semicolon saboteurs!

00m51s  Slipping backwards on immigration. (A year and a half on, not much to show.)

09m56s  Feminist hero slaps women around. (Indignant? Not me.)

15m55s  Time to get out of Northeast Asia. (We're there because we're there.)

31m21s  Perils of proliferation. (Is there any alternative to deterrence?)