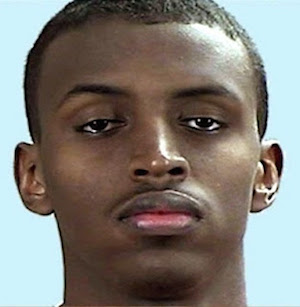 In March, I wrote about an interesting experiment in Muslim rehabilitation (Can Minnesota Assimilate Somali Teen Jihadist?) where a Middle East-bound Somali residing in Minneapolis would be given the top therapy America could offer. Abdullahi Mohamud Yusuf (pictured) was arrested as he boarded a plane for Syria, planning on a glorious jihad of murdering as many infidels as possible. But local do-gooders figured he was a good candidate for rehab, since he was nice to his mom and played football in high school.

One of the carrots dangled before young Yusuf was the goal of his being trained to “coach basketball, mentor other teens.” What an optimistic plan. We love our hoops in America, but it might not have the same cultural appeal to Somali youth enthralled with the romance of mass murder for Mohammed and the promise of paradise with 72 available virgins.

Still, NPR gave the effort high praise in a February report: A Model For De-Radicalization In Minneapolis. It remarked the idea was “to take an existing program called Empowering You and adapt it for Minneapolis’s large Somali community.” The plan sounded like social work flavored with community organizing.

Yusuf could have gotten a sentence of 15 years in the slammer, but the judge was convinced to give him a chance at rehab. But Yusuf failed in some unspecified way to follow the conditions placed upon him in the halfway house.

The case underlines the failure of Muslim immigration. Not every single one goes on to a career as a headchopper in ISIS-stan, but some do. Why does America perversely admit the historic enemies of western civilization? There seems to be a certain arrogance about our assimilation process, even as it is crushed by the extreme diversity of millions. When a group establishes its own neighborhoods and maintains its culture while rejecting the America outside, the traditional social contract of welcome given for immigrants assimilating has disappeared.

Somalis are among the worst in terms of actively expressing the worst of Islam. Yet the administration currently admits 800 Somalis per month to America.

The example of Abdullahi Yusuf’s failure to assimilate and instead continue to embrace jihad should be another sign that Islam cannot be cured. The only answer is quarantine to their own lands. Muslims have plenty of territory, so they should be happy to stay home among themselves.

Our government promoting Islam immigration to the west is a mistake that greatly increases the danger to us.

Halfway house was hailed as a step to rehabilitate at-risk youth.

Abdullahi Yusuf, a Somali-American defendant accused of conspiring to support terrorists in the Middle East, has been taken into custody for violating conditions while living in a St. Paul halfway house, according to court documents filed Monday.

Yusef, a student at Inver Grove Community College, drew national attention after a federal judge decided to place him in a halfway house and provide counseling for him rather than hold him in custody while awaiting sentencing.

Yusuf’s violations were not detailed in court records.

After Yusuf pleaded guilty earlier this year to conspiracy charges, Chief U.S. District Judge Michael Davis agreed to a proposal by his attorneys to enroll the 18-year-old man in Heartland Democracy’s program designed to reshape the attitudes of troubled youth, with special emphasis on Somali-American teens who feel disenfranchised. The move was hailed by counterterrorism experts as a novel idea and was viewed as a test case on whether such persons could be rehabilitated.

In May 2014, Yusuf was stopped from boarding a flight by FBI agents at Minneapolis-St. Paul International Airport. He’d bought a ticket for Istanbul, Turkey, records showed. Agents had been tipped to Yusuf because of his suspicious behavior when he applied weeks earlier for a passport.

A day later, Yusuf’s colleague, Abdi Nur, successfully flew from the airport and made his way to Syria where he is fighting for the Islamic State of Iraq and Levant (ISIL).