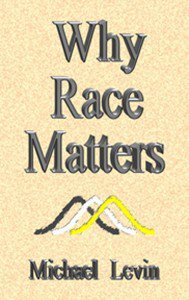 Way back in 1997, in Why Race Matters, philosophy professor Michael Levin wrote,

In other words, neither right nor left admit biological, inherent or genetic racial differences in intelligence or behavior, but the left at least better accounts for conflicting evidence.

or columns like the recent series on race from Nicholas Kristof.

For the "conservative camp" commenters, "lack of moral values", "lack of fathers/stable families" or "lack of personal responsibility" explain differences in black crime or economic status. No inherent, biological or evolutionary difference is ever admitted. And you get the sense that these conservative campers aren't just being politically correct — rather, they just haven't ever been exposed to the idea.

In one of his columns, Kristof quotes "Bruce", who says that poor or jailed blacks have only themselves to blame, and tweets that "Blacks don't get it. Choosing to be cool vs. getting good grades is a bad choice. We all start from 0."

But the key insight here is: we don't "all start from 0." Just not for the reasons Kristof cites.

The norms of white society evolved, quite naturally, with whites themselves. White society bases its criminal laws and punishments on a very specific view of the seriousness of explosive and destructive violence, which for blacks is obviously a far less serious deal. Economic success in white society is, again, pretty naturally aligned with white abilities and white values, which blacks do not share.

So for conservatives to bash blacks as lazy and violent as if they could be expected to match white norms is actually kind of cruel -somewhat like ascribing a short man's lack of height to a moral failing on his part, and continually goading him about his failure to be tall.

The whole thing is absurdly dysfunctional. Whites shell out billions while unconscionable numbers of blacks stay locked away for decades. All the while, Nicholas Kristof and "Bruce" just yell past each other.

And yet, for many reasons, admitting any inherent inferiority on the part of blacks would be painful, awkward, and perhaps impossible. I sometimes suspect that America is more likely to break up into racially homogenous cantons than it is to admit, as a matter of general social consciousness, that blacks are simply pre-programmed to be less smart and more crime-prone.