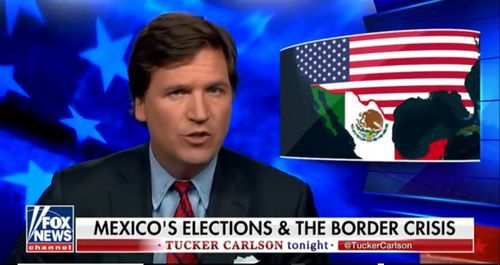 Anyone who has paid attention for more than a minute to Mexico’s attitude toward the United States must recognize that it views us as a predator sees its prey, and Washington has not done anything to dissuade their evil intentions. America’s squishy borders allow Mexico to export its poverty and avoid reform, while receiving billions of dollars in remittances yearly from its loyal citizens — collecting a record $28,126,000,000 in 2016.

Now the top-ranked presidente candidate, communist Andres Manuel Lopez Obrador, has declared that immigration to the United States is a “human right” for all Mexicans.

It’s odd that a candidate would campaign for the right of his citizens to leave for another country rather than explain his plans to improve the nation he hopes to run, but Mexico is odd in basic ways.

What’s not to mistrust about our corrupt and hostile neighbor?

Tucker Carlson had a fine explanatory introduction to the subject of Mexican perfidy a couple days back. When he turned to interview Jorge Ramos, the Mexican journalist unsurprisingly proceeded to argue for Obrador and call Trump racist for defending the US border — making it look like Tucker was right on target with his criticism.

TUCKER CARLSON: You’ve heard a lot recently about the sinister influence of foreign countries on our government. Our enemies abroad we are told: take advantage of our political system to hurt us and help themselves. Well we’re right to be worried about that: it’s actually happening. The chief offender is not Russia, though: it’s Mexico. Mexican authorities encourage illegal immigration into our country. They publish instructions showing illegal aliens how to evade deportation from here. They guide migrant caravans north on their way to America. They send their poorest people here because it’s cheaper than taking care of them. Their America is now Mexico’s social safety net, and that’s a very good deal for the Mexican ruling class.

In 10 days Mexican voters will select a new president. The favorite in that race as of tonight is a man named Andres Manuel Lopez Obrador. In a speech on Tuesday, Lopez Obrador said that as president, his administration will quote “defend all the migrants in the American continent and all the migrants in the world who must leave their towns and find a life in the United States.” He added that everybody in this world has a human right to enter our country, the United States of America. And when you think about it, you can see why he feels that way because in a recent speech he also admitted that the Mexican economy is dependent upon remittances from the U.S. to Mexico. [Editor: Even though wealthy Mexico ranks #15 in world GDP! ]

By the way, Lopez Obrador has suggested that he may give amnesty to Mexico’s drug cartels. Those are the people who produce and import the opioids that have destroyed the center of this country, the ones that kill tens of thousands of Americans every year, the fentanyl that comes from Mexico. People who produce that and kill Americans — off scot-free. But it turns out Lopez Obrador’s constituency isn’t just in his own country, it’s here. That’s odd because we’re told over and over again that immigrants are eager to assimilate here in America, but apparently Lopez Obrador didn’t get that memo. Just last year he campaigned for the presidency of Mexico in more than a dozen American cities since Mexican citizens living abroad are still allowed to vote back home.

Jorge Ramos is one of those Mexican citizens as well as Univision anchor, and he joins us tonight, thank you very much for coming. Tell me a little more about this right of all the people in the world to come to the United States — where does that right come from?

JORGE RAMOS: What he has said is that he’s vowing to be a president for the 130 million Mexicans in Mexico and for the about 12 million Mexicans here in the United States, so don’t expect a Lopez Obrado to be a spineless and weak president like Pena Nieto. It’s going to be a completely different relationship between Lopez Obrador if he wins and President Donald Trump.

Perhaps at that point, Americans will realize that Mexico is not a friend.