A couple of years ago I wrote an article for Chronicles called Thomas Jefferson’s GPS about one of the most brilliant services Jefferson provided his young nation. A real estate lawyer himself, Jefferson felt that his profession was slowing the economic development of America due to the arcane nature of traditional European systems of determining title to particular plots of land. 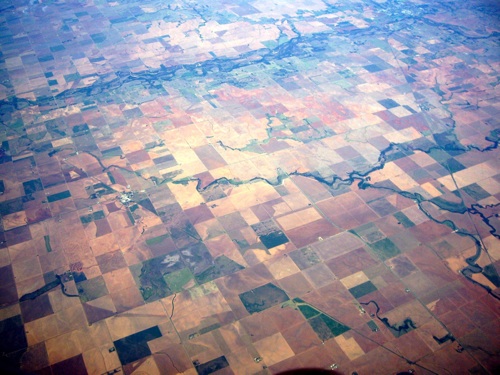 During the 1780s, Jefferson created a state of the art astronomical system for applying a grid of latitude and longitude to the Midwest to simplify federal land sales to settlers. You can see the grid pattern today as you fly across the Western 3/4ths of the country.

As Peruvian economist Hernando de Soto often complained, Latin American property title systems remain woozy, which retards development and plays into the hands of whomever can employ the best lawyers who know a guy who knows a politician.

For example, when American golf course architect Gil Hanse arrived in Rio to start building the Olympics golf course, he found out that the rich guy who had claimed to own the undeveloped land maybe didn’t really own it. Or maybe he did. In Brazil it’s hard to say for sure. So nothing got done for a few years while lawyers billed billable hours. At the last possible moment, some opaque deal was struck and the golf course got built in time.

TULUM, Mexico — By the time Renaud Jacquet arrived at his compound of rental beach villas, invaders were crawling all over the place.

They were storming through the buildings, emptying out rooms and dumping furnishings and supplies in piles outside. One of the men was wandering around clutching a bottle of Mr. Jacquet’s wine.

Similar scenes unfolded up and down the coveted stretch of Caribbean coastline in Tulum, Mexico, in June. Hundreds of men working for a security firm — carrying sticks, metal pipes and machetes, witnesses said — raided 17 properties, including hotels, private homes, boutiques and a beach club. They evicted everyone on the premises, including tourists, some of whom had been roused from their sleep.

“It was like the mob,” Mr. Jacquet recalled. “It’s the French Revolution!”

Yet the takeovers, which seemed to catch the property owners by surprise, were apparently legal, authorized by a judge’s order. Several police officers stood by and watched; they were there only, it seemed, to protect the court officers who had delivered the bad news.

The evictions were the most recent, and by far the largest, in a series of court-ordered expropriations that have shaken this tourist town and stained its image as a laid-back, eco-chic retreat that has become wildly popular among tourists, particularly those from the United States and Western Europe.

Some here, including many of the business owners directly affected by the property seizures, say the evictions and their bitter fallout have exposed an ominous truth about Tulum: that this seemingly Edenic stretch of coastline on the Yucatán Peninsula is hardly immune to the kind of troubles bedeviling the rest of Mexico.

Corruption, inconsistent government regulation and an opaque legal system, these residents argue, are threatening to ruin a Mexican paradise.

At the heart of the dispute are competing land claims that go back decades. Business owners who have been evicted say they are being robbed of their beachfront property through an elaborate system of fraud involving forged land deeds, fake contracts and violations of due process, facilitated by corrupt government officials and judges. The paucity of public records, the business owners say, has made defending their property claims even more difficult.

“American tourists need to really know what’s going on down here,” said Ken Wolf, an American entrepreneur who lost his hotel in Tulum in a similar raid several years ago. “There’s no rule of law.”

When Mr. Jacquet, who is French, bought his first parcel of land here in 2004, along beachfront known as Punta Piedras, he was vaguely aware that his ownership might not be airtight.

“It was amazing to find a place like that: so undeveloped, so close to New York,” Mr. Jacquet, 52, said …

There was also a loose adherence to the rules, which at the time worked in the favor of the pioneers. New homes and hotels were often going up without all of the necessary government permits. And when permission was secured, it was sometimes through bribes.

“Today, if the federal government comes with the law in hand and analyzes the ecological situation, I don’t think anybody would remain,” said Matías González, one of Mr. Malleville’s business partners.

Tulum was able to maintain its human-scale, iconoclastic sensibility partly because of the legal uncertainties surrounding land ownership, which kept the big hotel chains at bay.

When he bought his first parcel of land, Mr. Jacquet’s understanding was that it had been part of a 26,000-acre tract that had been set aside in the early 1970s for members of a farming collective, or ejido, as part of a government effort to formalize property rights for landless farmers and encourage settlement in underpopulated areas.

Yet he soon learned that a family from the distant northern state of Nuevo León claimed to have a title to part of the ejido land, a conflict that had percolated for years.

Mr. Jacquet did not let it deter him. “I looked at everyone else, and we weren’t worried because nobody had lost their land,” he said.

“Nothing ever happens in Mexico until it happens,” said (maybe) dictator Porfirio Diaz.

You are often told that if you look at a map, you can see that it’s a law of nature that the United States of America must fill up with Mexicans. You almost never hear anybody suggest that the map implies that Mexico must fill up with Americans, which would seem more likely a priori.

How do the Mexicans keep the gringos from inundating Mexico? Some of it's by law, some of its by violent lawlessness, but a lot is by a sort of passive-aggressive cruddiness: nobody is too sure who owns what land, the streets are dangerous to cross if you aren’t young and nimble, the hospitals are kind of inept, and so forth and so on.

Former foreign secretary Jorge Castaneda suggested that if Mexico were to try to make the country more appealing to American retirees, they’d find they had made the country better for Mexicans. But that idea hasn’t proven popular.