Memo From Middle America | Mexico Is “Helping” Us With Amnesty (But There Could Be A Silver Lining, If We Take Advantage Of It!)

If you insist on watching the State of the Union, here it is.

The Obama Administration is vowing defiance against the new Republican Congress (the White House website promises more of the same in tonight’s SOTU—Obama has invited an actual illegal to be present) but it has no problem working directly with the Mexican government to implement its unilateral Amnesty/Immigration Surge. Mexico’s support isn’t limited to just words—it’s actually providing documentation to allow Mexican illegals to remain north of the border. And nobody in our government—in either party—seems to care about this.

It’s not like the Mexican government is bothering to conceal its intentions. Mexican President Enrique Peña Nieto recently met with President Obama at the White House. Incredibly, Peña Nieto offered to help his fellow leader implement what he termed Obama’s “very intelligent and audacious policy.”

Mexico’s president told President Obama Tuesday that his government will supply the documents necessary for millions of illegal Mexican immigrants to prove they’ve been living in the U.S. prior to 2010, a move that will help them qualify for Mr. Obama’s recently announced deportation amnesty.

Of course, how can Mexican documents prove residence in the United States? And how come Nieto sees his government’s role as “[ensuring] that Mexicans who want to stay in the U.S. can do so”?

Mexican meddling in ostensibly American immigration policies has been a regular occurrence for years, but even though Congressmen and Senators will drone on about all sorts of marginal issues, none of them (including Republicans) seem terribly interested in it.

It’s not just at the federal level. Mexico is also heavily involved in the state of California’s effort to provide driver’s licenses to illegal aliens. California’s Department of Motor Vehicles signed a memorandum of understanding with Mexico’s Foreign Ministry to work together to implement the program. The agreement allows illegal aliens in the formerly Golden State to present a Mexican passport, a Mexican Voter ID card, or a matricula consular in order to receive a California driver’s license. (So much for the Constitution’s Article I, Section 10, which prohibits states from making an agreement with a foreign power).

No wonder President Peña Nieto refers to California as “the other Mexico.”

What is emerging from the governments of Mexico and the United States is a unified bureaucratic approach towards Mexican nationals living in El Norte. For example, on January 15th Mexicans residing illegally within the United States were able to obtain their birth certificates at Mexican consulates. The explicit purpose was to help them “obtain the identity documents needed to apply for [American] driver’s licenses and work permits.” [Mexican consulates begin issuing copies of birth certificates, by Kate Linthicum, Los Angeles Times, January 15, 2015]

The center of the Mexican effort is the country’s consulates. According to the LA Times,

In the past, Mexicans were able to get birth certificates only from government offices in Mexico, leaving immigrants in the U.S. to rely on friends or family members back home to obtain the documents for them. Now, an official at one of 50 Mexican consulates across the U.S. will be able to access a digital archive of birth records from most parts of Mexico and print a copy of the certificate on the spot.

Of course, as Jo Wideman of CAPS (Californians for Population Stabilization) was quoted saying, “We think it is strange that any country would welcome the fact that its citizens want to live elsewhere and, in fact, expedite the process for them.”

And this does seem to be a policy priority for the Mexican government. There are 50 Mexican consulates on U.S. soil (ten in California). These consulates are centers of foreign influence and meddling in U.S. internal politics.

Indeed, the Mexican government is always eager for publicity in its endless quest to support illegals on U.S. soil. Mexico’s Foreign Minister, Jose Antonio Meade, was at the Mexican consulate in Santa Ana, California, to personally issue a birth certificate to a Mexican illegal alien who had requested it: Meade da primer acta de nacimiento a connacional en EU, (El Universal, January 15, 2015). This article features a picture of elite “white Hispanic” Meade presenting the mestiza illegal alien Mexican her birth certificate. It’s a living metaphor of how the vast Mexican emigration scam tends to work. 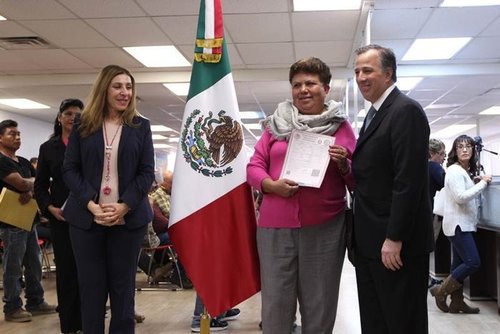 Jose Antonio Meade has an Anglo surname, but his family has been in Mexico since before the Civil War.

It’s worth stepping back and noting what is happening here: There’s a word for this. That word is colonization.

After all, Mexico’s own immigration policy, quite rationally, puts Mexican citizens first and only allows immigration if it helps the host country.

In contrast, “our” own government seems to be in open alliance with a colonization effort by a foreign government. Again, it’s not as though this is a secret conspiracy. Mexican officials and diplomats are quite clear about their intentions, as are our own government officials.

Is there a silver lining? Maybe. Ironically, this latest brazen attempt by Mexico to meddle could be a blessing in disguise.

So the next time an illegal alien anchor baby is born on American soil, just send his parents down to the nearest Mexican consulate. They can register him there—as a Mexican citizen!

In fact, since the Mexican government has been so good to set up the necessary infrastructure for this, why shouldn’t the Republican Congress simply abolish birthright citizenship?

Thanks to Mexico’s own efforts, it’s not like any Mexicans residing in the United States will encounter any obstacles in obtaining the documents they need to live in their country.

We could even thank President Peña Nieto for making it possible. After all, any self-respecting national government wants to look after its own citizens.

If only Americans could say that about our own government.