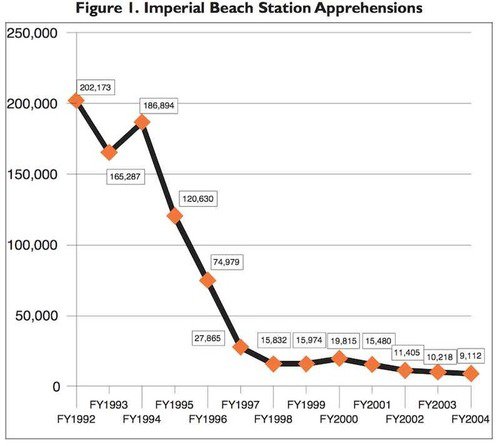 Jeb Bush went down to the Mexican border last week. On Wednesday in Florida he made it perfectly plain he has no intention of building an effective fence to impede the invasion by his wife’s compatriots.

“I went to McAllen, Texas, in Hildago County, last week and met with the Mayors, the County Judge, and the Sheriff, right out of central casting with a big mustache…”

He said these Democrat community leaders told him, “You can’t build a wall and solve this problem in our part of the country. The terrain is too rugged, you’d have to keep American citizens on the other side of the wall, and you couldn’t access the river, which is part of the economic driver of the community, it is an agricultural community, they need to have access to the water. And it’s not a feasible to build a wall

“I’ll tell you what they say on the border,” Bush continued, “it would tear apart their community, would hurt their economic activity, and it’s not needed…“I don’t think we should spend hundreds of billions of dollars with an impractical solution.”

So for Bush for the convenience of a few border dwellers of dubious loyalty America has to be inundated by an Hispanic proletariat.

How incredible that in 2015, two years after Israel completely shut down a massive influx of Africans by building a 245-mile fence right across the rugged Sinai Peninsula, Bush should be peddling this nonsense about impracticality. Even the New York Times has admitted the Sinai fence worked. Why doesn’t he ask GOP owner Sheldon Adelson? Adleson is on the record about fences: Sheldon Adelson: “Put A Big Fence Around Our Country” (Israel, That Is)

Or for a more reliably honest discussion read The Case for the Border Fence Daniel Horowitz Conservative Review August 25th 2015 which I commend as an excellent political analysis, as well as a definitive discussion of the practical issues.

Yes, border fences work.  And that is exactly why the political class is so stridently intent on opposing the construction of a full double-layered fence or any effective barrier at the border.

The bipartisan open borders cartel is all in favor of discussing sundry forms of “border security,” especially if it will afford them the political cover to pass amnesty.  But the one tangible form of border security they will never support, and in fact, pull out all stops to prevent, is the completion of the border fence.

Congress passed a bill in 1996 to require construction of a double-layered fence (triple-layer in some places) in the San Diego corridor along the coast.  You can see a picture of the fence with razor wire here.  By the end of the decade, apprehensions fell by 95%

…because Congress essentially gutted the Secure Fence Act in 2007, granting the DHS secretary discretion to waive the double-fence requirement and a number of deadlines.

(Treason Lobby forces defunded the Fence, like we were told couldn’t be done with Obamacare.)

The 245-mile security fence in Israel cost $450 million, averaging $1.8 million per mile.  Assuming the completion of our security fence would cost the same amount, the total tab would come in at just under $2 billion.  Even if we use higher estimates of 9 million per mile, as estimated by DHS for the cost of the San Diego fence, that would amount to roughly $6 billion for the project.

According to a conservative estimate by Robert Rector of the Heritage Foundation, for every illegal alien that returns home (or is prevented from crossing the border), taxpayers save $700,000.  That means we would reach the break-even point after preventing just the first 8,500 illegal immigrants from crossing.

This essay is a great factual presentation. But what really impresses me is the concluding analysis:

...we should not need a full security fence at our southern border.  As Moses observed when the Jews were conquering the land of Canaan, the weaker cities were the ones encompassed by a wall while the stronger ones were confident in their prowess for defense.  And indeed, if we had a country that actually enforced our laws, cut off the magnets, and held the government of Mexico accountable for their violation of our sovereignty, we wouldn’t need a wall.  But we are not a strong country at a political level.  In fact, we have a weak and malfeasant governing class.  We therefore need a border fence.