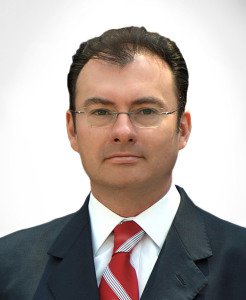 Trump’s border wall proposal, and especially his proposal that Mexico pay for it, continues to elicit strong condemnation and refusal among the Mexican elite.

The latest Mexican government official on the bandwagon is Luis Videgaray, secretary of Hacienda, the powerful finance ministry. Unsurprisingly, Videgaray (pictured right) is a white Mexican.

Mexican Finance Minister Luis Videgaray called billionaire Donald Trump’s proposal to force the country to pay for a wall along the U.S. border, or face economic consequences if it doesn’t, a kind of diplomatic harassment that’s doomed to fail.

This whole business about the wall and having Mexico pay for it has certainly gotten their attention, hasn’t it?

“Mexico will not pay for that wall, not only because it doesn’t make any sense for either Mexico or the U.S. to enter into that type of threat rhetoric, but it’s also a matter of dignity,” Videgaray said Saturday in an interview in Washington. “There’s no way in which Mexico can be bullied into doing such a thing.”

No way? How about the taxing of remittances to Mexico?

For Mexico, though, there is a simple solution. If the Mexican government doesn’t want to pay for the wall, then its officials should tell Mexicans not to send back remittances from U.S. territory.

Bloomberg has noticed Mexico’s strategy to get more Mexicans naturalized in the United States.

Mexico has taken action to counteract Trump’s anti-immigrant message, including mounting an unprecedented effort to [convert] the country’s many permanent residents in the U.S. into citizens, a status that would enable them to vote — presumably against Trump. Officially, Mexico says it respects U.S. sovereignty and has no strategy to influence the result of the presidential race. Yet diplomats are mobilizing to assist immigrants in gaining U.S. citizenship, hosting free workshops on naturalization.

Ask your senators and representatives if they think it’s ok for Mexico to meddle in our electoral politics.

“The proposal to make Mexico pay for a wall and trying to achieve that through a set of threats is a proposal that has already failed,” said Videgaray, who was attending the spring meetings of the International Monetary Fund and World Bank.

“Already failed”? It hasn’t even been tried!

According to Bloomberg’s own calculations, remittances were up in 2015:

Mexico received $24.8 billion in remittances last year, the highest level since 2008, according to data compiled by Bloomberg. In 2012, 98 percent of remittances to the Latin American nation’s $1.29 trillion economy came from the U.S., according to the Pew Research Center.

When remittances go up, that means that (1) there are more Mexicans in the U.S., (b) they are sending back more money, or (3) both. Regardless, it’s money that could be taxed to build a wall.