E-Verify And The Deep Duplicity Of Our Government On Immigration 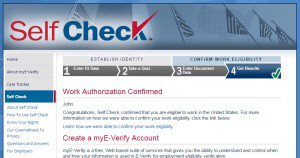 I am pleased to report that our federal government certifies me as "eligible to work in the United States."

There'd be something wrong if they didn't.  I've been continuously domiciled in the U.S.A. for 25 years; and for the last 14 of those years—as of tomorrow, April 19th, to be precise—I have been a naturalized U.S. citizen.

So why did I feel moved to check?  Let me explain.

In the April 1st Radio Derb I mentioned Ron Unz's argument that a higher minimum wage would reduce illegal immigration.  I then wondered aloud:

If we're going to bully employers to pay a high minimum wage, why not let's bully them to use E-Verify, which would kill off job opportunities for illegals much more reliably?

I'm sorry to report that I have fallen for a scam.  That's what E-Verify is: a scam.

This was explained to me by a listener:

E-Verify, by design, does not prevent one illegal from being hired. It does not throw one illegal out of work.

If you have the time I recommend that you review the E-Verify manual for employers.

What you will learn is this:

You may not use it to screen applicants. You may only use it on new hires. Hiring an illegal who presents fake documents is not illegal, and rejecting fake documents makes you liable for national origin discrimination. (Google "document abuse.")

So E-Verify does not stop them being hired.

Very few people seem to be aware of this, except of course for HR departments . . . It shows how deeply duplicitous the government is when it comes to immigration and employment law. The law has been made unenforceable by design, and packaged in a shiny app that has been marketed as kind of instant status check, which it is not.

Please do review the manual I linked to and see for yourself. The government thoughtfully provides manuals for HR departments regarding the conventional process as well, it does not take much Googling to turn them up.

The upshot is that employers are following the law when they hire illegals, provide they leave no paper trail saying they are aware they hiring them and that the illegal presents some sort of plausible documentation. So there is no legal way to "crack down" on employers hiring illegals.

The corollary is that a lot of illegals are probably making at least minimum wage, paying payroll taxes, etc. all on the wrong SSN. In my work SSNs are useless for identifying people; too many people are sharing them, or use more than one.

Those are my italics there.  "Deeply duplicitous" seems right.

I followed up and read the E-Verify manual for employers.  My listener's information seems correct.  On a whim, I then followed that Self-Check link from the manual, to confirm my own employment eligibility.

"Deeply duplicitous" . . .  There is no mightier political force today in European and European-settler nations than promotion of mass immigration.  All our laws and regulations have been twisted to enable it; every other legal and political principle is subordinate to it; and the truth of all this is hidden inside a squid-ink cloud of buncombe about "enforcement" and "reform."

A key component of this absolutist mass-immigration-über-alles regime is the further twisting of laws and rules to make deportation of illegals well-nigh impossible.  That is what we see with this bogus E-Verify scam.

I should have been aware of this.  I'm glad to have been enlightened.  In this zone of "deep duplicity," you can never be cynical enough.

It's the same all over the Euro-civilized world. Every day I read stories like this one out of the Old Country.

As they walk down an East London street, Dennis Kyeyune and Lamulah Sekiziyuvu both look carefree.

They live in separate rent-free taxpayer-funded flats because neither is working, and each takes home £500 a month in benefits because they claim that they have depression.

Behind the smiles, however, there is a more sinister side to Kyeyune and Sekiziyuvu. Both were members of a notorious nine-strong gang that stole more than £4million in benefits.

The gang's crime spree was highlighted four years ago by the Daily Mail when they were involved in a six-week trial at Croydon Crown Court in South London.

At the time they were accused by a judge of committing 'fraud on a huge scale and an outrageous abuse of the hospitality' offered by Britain. They were also told that they would be subject to automatic deportation because their sentences were longer than 12 months.

But every member of the gang who has served their sentence is now free and still living in Britain. [Laughing on our streets, 'depressed' benefit cheat migrants we can't deport: How two members of a notorious crime gang are each taking home £500 a month in handouts by Christian Gysin; Daily Mail, April 15th 2016.]

In the astrophysical phenomenon called a "black hole," spacetime has become so distorted that not even light can escape from it.

Our laws on immigration and citizenship are in an analogous state.  The gravitation forces of immigration romanticism, pathological universalism, cheap-labor economics, and nonwhite supremacy are now so mighty, no particle of patriotic common sense can escape from them.