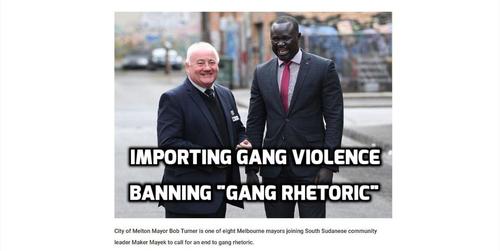 Eight Melbourne mayors have called for unity and end to the talk about so-called “African gangs” which has repeatedly made news headlines this year.

African-Australian leaders in Victoria have said the “gang” rhetoric is an example of fear-mongering and has vilified their community to the point some now feel unwelcome in the state. …

“We stand together to say that we value the contribution of these residents, deeply appreciate the diversity of culture and experience they bring to our cities,” City of Moreland Mayor John Kavanagh said. …

Home Affairs Minister Peter Dutton made headlines in January after claiming Melbournians were “scared to go out at restaurants” at night because of “African gang” violence.

Political talk has raged at a federal, state and local government level ever since. Media coverage has also been continuous.

With Victorians set to head to the polls later this year, City of Whittlesea Mayor Kris Pavlidis accused politicians returning to the “African gang” rhetoric of turning the rift into an election issue.

How can Australia be a democracy when rifts are turned into election issues? The essence of democracy is that elections shouldn’t decide anything.

“The role of political leadership is to unite diverse communities, ensure vulnerable people are given the tools they need to thrive and to dismantle unhelpful stereotypes and prejudice – not to amplify them,” Cr Pavlidis said.