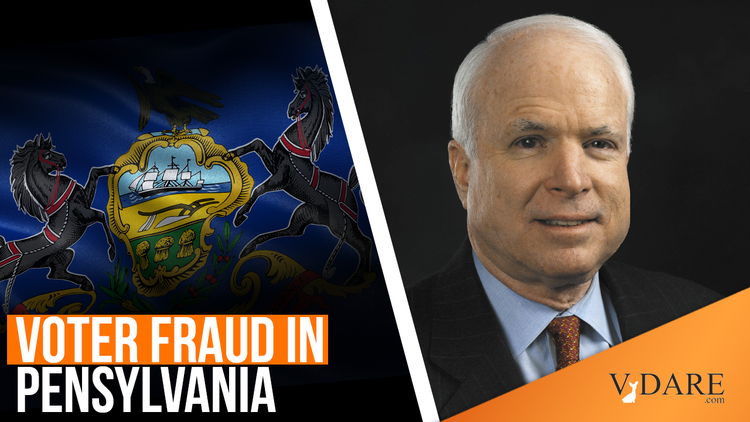 In his post-mortem on the McCain Vs. Obama election of 2008, Steve Sailer wrote GOP Can Play By "McCain Rules" And Lose, Or "Sailer Rules" And Win.  McCain's campaign was extremely lame, and then he made what we're now being told was a wonderful concession speech saying nice things about Obama.

In 2011, when Obama was having some difficulties, I quoted Ann Althouse:

Obama wisecrack: "Maybe I should throw the game."

Spoken during the 2008 campaign, in the context of observing all the problems the next President would face.

Quoted by Maureen Dowd, who, naturally, wisecracks that he must now wish he had.[More]

I commented that Obama wasn't really in a position to throw the 2008 election, once he had the nomination—John McCain threw it, out of white guilt, and political correctness.  I don't see how they could both throw the election.

But neither Sailer or I knew what kind of surrender McCain had engaged in just before his graceful concession speech. That only came out with Wikileaks in 2012.

One of the most important, and overlooked, news items to come out of Wikileaks: the news that black Democrats in Philadelphia and Ohio engaged in voter fraud during the 2008 President of the United States election. Andrea Shea King of WND.com reported that

“2008 Republican presidential candidate John McCain decided not to pursue legal action against the Democrats for engaging in voter fraud, believing that to do so would have thrown the country into civil unrest…”  [Wikileaks reveals Democrat 2008 election crimes, March 5, 2012]

According to one leaked email on Wikileaks.org:

After discussions with his inner circle, which explains the delay in his speech, McCain decided not to pursue the voter fraud in PA and Ohio,  despite his staff's desire to make it an issue. He said no. Staff felt they could get a federal injunction to stop the process. McCain felt the crowds assembled in support of Obama and such would be detrimental to our country and it would do our nation no good for this to drag out like last go around, coupled with the possibility of domestic violence. [Insight - McCain #5 ** internal use only - Pls do not forward ** , 2008-11-05 14:40:28]

But since Obama’s election, we’ve had nothing but “domestic violence” in communities across the country—with the rights of law-abiding citizens restricted due to the actions of, primarily, black males.

Looking at the landscape of the America in 2012, seeing how many cities require curfews to keep the peace, it is easy to discern the type of “civil unrest” McCain feared. [More, emphases added.]

And of course, that's right—rioting under Obama was supported by the White House,  with Obama and Attorney General Holder siding with both the Ferguson and Baltimore rioters against the police.

McCain wasn't wrong to think blacks might riot if Obama lost, but he was wrong to surrender preemptively. After all, as we pointed out before the election, blacks were going to riot either way:  The Riots Next Time? Racial Violence Looms If Barack Obama Loses—Or Wins, By Matthew Richer on October 24, 2008.