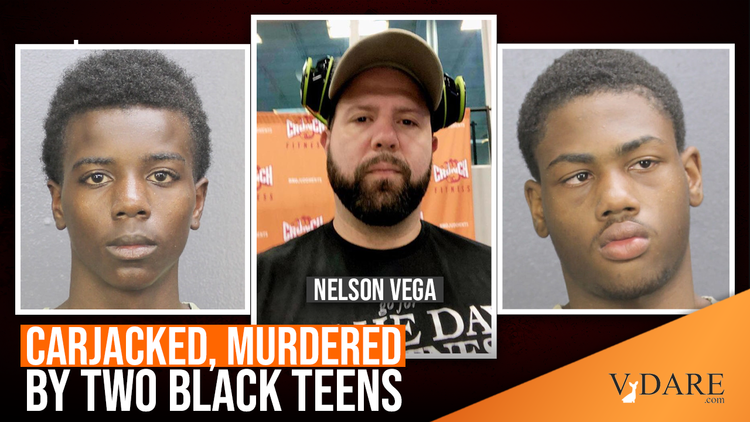 Earlier: His Name Is Nelson Vega: A White Male Carjacked And Murdered By Two Black Teens

From New Orleans (in this one minute video, you can skip from 0:20 to 0:40 because the truck owner is getting pistol-whipped off camera):

Has carjacking returned as a common crime during this year’s George Floyd Mourning Process?

Here in L.A., carjacking was a plague during the 1990s crack years. But it seemed like it had been mostly stamped out in this century. But lately I’ve been hearing about carjackings on genteel Ventura Blvd.

It is definitely back in New Orleans. From Fox8:

NEW ORLEANS (WVUE) – On Tuesday afternoon at around 2:30 p.m., someone carjacked an 84-year-old woman in a parking lot off of Crowder Boulevard. Police say the gunman threatened to shoot her and then pushed her to the ground before taking off in her vehicle.

A few hours later, someone carjacked another woman in the 2100 block of Florida Avenue. It’s the latest incidents in a spike of carjackings. According to city data, carjackings are up 106 percent this year compared to last.

Monday afternoon, a mother was carjacked in a busy Mid-City neighborhood while she was trying to put her young son in his booster seat. The victim says they were carjacked at gunpoint in the parking lot of an office where her son goes to therapy on Bienville near Carrollton. …

“There were 32 reported carjackings versus 3 in the month of October the year before, so that’s more than a 960 percent increase,” Goyeneche said.

Goyeneche believes the alarming rate of carjackings is a reflection of changing crime trends.

He says police attacked the auto burglary problem, but he believes the criminals have changed strategies. Carjackings, though, are much more serious.

Normalizing masked men walking down the street hasn’t helped in the fight against crime.

Carjacking is also way up in Minneapolis, the home of the George Floyd Mourning Process. From the Minneapolis Star-Tribune, a vivid article by Liz Sawyer:

… Police say suspects tend to approach victims on the street, sidewalk or parking lot — often while they’re distracted with routine tasks. A significant number of armed stickups have targeted seniors and unaccompanied women at their vehicles on Minneapolis’ South Side.

“You should be able to unload groceries out of your car without fear,” said Minneapolis police spokesman John Elder, noting that the department responded to the increase in carjackings by adding investigators to the team handling auto thefts.

Over the past five weeks, police have logged more than 63 carjackings in the city. MPD didn’t specifically track this type of crime until Sept. 22 because they were so infrequent. Previous cases fell under the larger umbrella of aggravated robberies and auto theft. The agency created a new coding system after the summer months yielded an unusually high number of attacks.

“These suspects have been known to ask for directions, then rob the victim of a purse, phone or car,” read an MPD crime alert issued last week in the Third Precinct. It advised residents to be aware of their surroundings and carry only essentials.

Another recent alert, in the neighboring Fifth Precinct, noted that the encounters involve suspects wearing masks and happen so quickly that it’s often challenging for witnesses to describe the assailants.

In a persistent wave of robberies since mid-July, a taxi driver was shot and killed after confronting two men breaking into his cab. A father of two was dragged a short distance when he tried to stop a man from stealing his vehicle with his wife and child inside. Juvenile suspects incapacitated motorists with chemical irritants in back-to-back Labor Day carjackings. Thieves stole the running car of a Domino’s driver — along with two handguns stashed inside — as he approached a St. Paul residence to deliver pizza Tuesday night. And Wednesday, teenagers followed a St. Paul woman into her open garage and ripped her from the driver’s seat by her hair as she talked on the phone with her mother.

The spree comes amid a nearly unprecedented spike in violent crime, particularly shootings, since the May 25 killing of George Floyd in police custody and the civil unrest that followed.

Fed up, citizens are flooding social media to warn their neighbors, encouraging one another to arm themselves or, at the very least, to buy security cameras and small GPS trackers for their keys.

Some lamented that their pleas for help have been largely drowned out by news of the day, including calls for police reform and the raging COVID-19 pandemic.

Steve Taylor, facilitator of the popular Uptown Crime Facebook page, is working to develop a registry of local victims, many who say they feel abandoned by elected leaders and fear an officer shortage has emboldened criminals.

“[The City] Council wants to blame the police. Police want to blame the council,” Taylor said. “No one wants to take responsibility.”

Meanwhile, victims are left to deal with the trauma of the assaults on their own. By the time the 72-year-old woman sought medical treatment for her injuries last month, the robbers had racked up more than $1,000 in charges on her credit cards.

Twelve hours later, three teenage boys riding in her car struck a tree while trying to elude police through the North Side. They all died at the scene.

“It’s sad that this is what kids are resorting to,” she told the Star Tribune. “Somewhere along the line, someone failed them.”

As a Minneapolis man approached his Uptown apartment late one Saturday night in August, three teenagers swarmed him outside the door. They pressed a handgun into the back of his head and showered him in Mace, stripping his wallet and car keys before speeding off in his Mercedes.

They led police on an early morning chase from St. Paul to north Minneapolis, where they were later arrested. The attackers were just 12 and 13 years old.

One of the boys’ mothers apologized for his behavior and told KARE 11 that she’s struggled to find resources for her son, who’s had repeated run-ins with law enforcement.

“I raised my son good,” she said, “but when he gets around other kids that have dysfunctional households … my son wants to kick it with the misfits.”

Authorities attribute some of the behavior to increased poverty brought on by the coronavirus and a lack of stability at home. Without in-person schooling and organized sports — which provide regular meals and exposure to positive role models — teens are more likely to succumb to the allure of street life, police say.

“There’s no disincentive,” Martin said. “They would be out before [officers] got done writing the reports.”

‘Women do not feel safe’

Susie Passons had just thrown the car in park, made an appointment on her phone and stepped out of the vehicle in the Linden Hills neighborhood, when four teenagers surrounded her.

The group shoved Passons to the ground, then pilfered her cellphone, bag and car — all in under a minute, before a bystander chased them off.

Ten minutes later, officers spotted her stolen black Audi less than 2 miles away, at a reported robbery outside a nail salon. The car has yet to be recovered.

Since the Oct. 23 attack, Passons has struggled to sleep and suffered flashbacks. For the first time in her life, she contemplated buying a gun.

“Today, women do not feel safe in Minneapolis,” she said. “Our once thriving city has become an utterly frightening place to live.”