The Big Lie of the Democrat Party is that it stands for the working American while also supporting open borders and unlimited immigration: both cannot be true because a surplus of labor always results in lowered wages. May Day is supposed to underline solidarity with worker rights and wages, but lately not so much.

It seems clear that to Democrats, the main lesson learned from the 2016 presidential election failure was that traditional Americans cannot be convinced of the virtues of liberalism, so a new people must be imported to gain their big-government votes. (Of course, it might have helped if Hillary had campaigned in the Rust Belt with a message of jobs for Americans rather than skipping Wisconsin altogether.) The D-Party now believes immigration is even more important to electoral success, so the issue has arguably become their #1 topic. It doesn’t seem like a winner of an issue to American voters, but the Dems’ analysis of 2016 has been an exercise in denial of the obvious.

Below, a number of Mexican flags can be seen in the Chicago May Day march. The holiday has largely morphed into a celebration of illegal immigration and open borders. 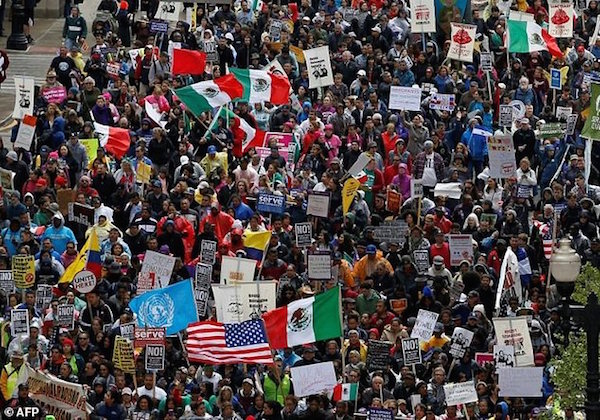 In one instance of May Day non-solidarity with citizen workers, the Chairman of the Democratic Party Tom Perez used the occasion to proclaim, No human being is illegal during a rally near the White House. With such an ideology, why do any US citizens belong to the D-Party when Democrats are happy to give away American jobs to foreigners??

Tucker Carlson took on the Democrat discrepancy following the May Day marches and rioting when he interviewed Steven Choi, a big immigration advocate. Choi’s pro-immigrant arguments are a little disingenuous: he talks up immigration as good for America but argues for amnesty for all illegals as if rewarding theft would be acceptable in a nation of laws. Of course, too many legal immigrant visas can crush American workers just as efficiently — remember the history of H-1b job destruction which has caused wage suppression of up to 5.1 percent according to a recent study.

Tucker Carlson argued specifically against the Democrats’ Big Lie of claiming to support both citizen workers and excessive immigration:

TUCKER CARLSON: International May Day protests got violent in Paris, but the French weren’t the only ones taking to the streets. Across the United States protesters march in opposition to the enforcement of American immigration laws. In the Bay Area, marchers demanded open borders, shouting “No ban, no raids, no walls, sanctuary for all.” Steve Choi is Executive Director of the New York Immigration Coalition; he took part in today’s protests and he joins us now. . .

I’m 47, so I’ve watched a lot of May Day protests. Imagine my surprise, watching an international workers’ day protest that was designed over a hundred years ago to highlight the concerns of workers — foremost among them of course wages — arguing on behalf of policies that would lower wages, and I thought, boy, global capitalism is pretty tricky: it got you guys to advocate on behalf of the Chamber of Commerce. How’d they do that?

STEVE CHOI: Tucker, it had nothing to do with that. I was with 5,000 people in Foley Square and hundreds of thousands all across the country, and we were there to make a statement about the shared values that we have as a country, and that is that immigrants are part of the solution. Immigrants have been making America great for centuries now: immigrants are workers, they’re business owners, they’re employers, they’re neighbors and families and friends. And so we want to join with hundreds of thousands people all across this country in peaceful protest to say, to make that statement that we are going to rise up and then we are going to fight back

CARLSON: Okay, I kind of agree with what you said. I’m for immigrants and they are all those things, and they’re great, but they’re also one of the reasons that the wages for American working class families have stayed stagnant or declined, because when you have an overabundance of something — in this case labor — its value falls. There’s no controversy about that. You’re advocating for that: you’re advocating in effect for lower wages for workers, and I just don’t know why.

The conversation continues, with Choi reciting pro-immigration statistics like additional economic activity that have nothing to do with wages. Tucker tried valiantly to make a dent with facts about the effects on Americans, but Choi wouldn’t budge from his smooth agitprop. But then why would mere facts succeed against a low-key invasion?