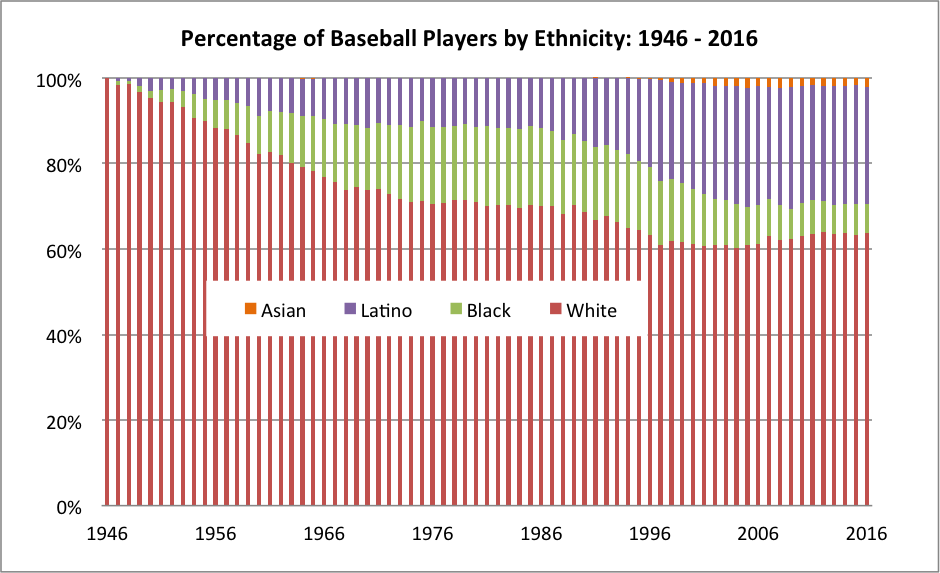 The percentage of major league baseball players got slightly whiter from about 60% in 2004 to 64% in 2016, largely driven by the profusion of relief pitchers in baseball, according to an article for the Society of American baseball research:

Baseball Demographics, 1947-2016
This article was written by Mark Armour and Daniel R. Levitt

Pitchers were about 72% white American these days, versus about 53% for position players.

Baseball teams recently carry more pitchers on their roster of 25 players (which this year increases to 26), and, my impression is, they shuttle pitchers back and forth between the minors and the majors more often now.

The Latin American surge has stabilized, while the African-American percentage was by 2016 barely a third of its 1981 peak.

The percentage of white outfielders also increased. African-Americans made up at least 40% of outfielders from 1966 to about 2000, but are now down to 22% while whites are up to around 50%. I’m wondering whether the new defensive shifts of recent years has cut down on the need for footspeed in outfielders because they are now positioned closer on average to where the ball will be hit. Also, the increase in strikeouts means that outfield defense is slightly less important.

Only about 2% of pitchers and catchers are African-American these days. As I mentioned in my Taki’s article this week, the decline in interest among African-Americans in baseball means that there are fewer blacks in the more technically intensive positions like pitcher and catcher. In contrast, my impression is that African-American basketball technical skills, such as in three-point shooting and defense, have improved.