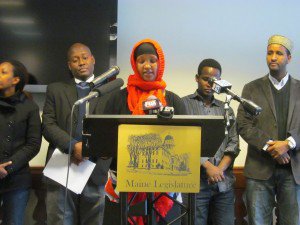 Not even the arrival of the terrifying Ebola virus (courtesy a West African traveler) can get the Obama Administration to do more than shuffle paper at the border. Nothing can be allowed to obstruct the Regime’s top policy goal: maximize the influx of people of color to drown the historic American Nation.

So this is a good time to consider Asylum seekers living ?in limbo in Maine by Kevin Miller Portland Press Herald September 14 2014.

This is basically the usual feel-good sob story about refugees but the writer does manage to include some key information (possibly by accident):

Several of the immigrants interviewed said they chose Maine because it is known as one of the few states to help asylum seekers.

A handful of states – California, Washington, New York, Minnesota and Hawaii – allow asylum applicants or other immigrants who have yet to gain legal status to receive similar forms of government assistance, according to a review of data compiled by the National Immigration Law Center and U.S. Department of Health and Human Services

“Asylum Seekers” —people who enter fraudulently on tourist visas and the like and then demand to stay alleging persecution — differ from refugees technically because the latter get status before they leave for America.

In Maine Asylum seekers and their allies have commandeered

...a program known as General Assistance. The GA program uses state and local funds to provide people who have little or no income with basic necessities such as rental vouchers to prevent homelessness and vouchers for food or medicine.

Apparently word is getting around Africa. Use of the program by invaders is surging-

The share of the General Assistance budget used to help asylum seekers more than doubled from 15 percent to 33 percent between 2011 and 2014, while the portion paid to non-immigrant clients fell from 72 percent to 49 percent.

None of these countries have ever had any connection with America - and more to the point with the British Empire, which means these individuals were extremely unlikely to have had the chance to learn English.

To their very great credit, the current Governor of Maine and the Mayor of Lewiston ( long an epicenter of this disaster) are trying to protect their communities. Refugee Resettlement Watch has a great archive in this catastrophe here.

Rhea “Becky” Jumna, a 19-year-old asylum applicant from Burundi, arrived in Portland alone in September 2013... “I came to Maine because of General Assistance…

The Obamacrats have declared a “No Borders” Policy. Administrative Amnesty is loudly advertised. Border enforcement remains weak. And the GOP Leadership seems to have been bought off.

So why not go to live in off Maine taxpayers? They provide a standard of living far above the African.