It’s funny how foreigners will cross boiling hot deserts to reach America, but once here, they avoid Americans like the plague and gather in ethnic enclaves where they erase the United States as much as possible. In some balkanized locales of extreme Hispanicity, like Miami, learning to speak English is not necessary and the foreigners can live their entire lives speaking Spanish only.

Of course, the foreigners come for the Yankee dollar only. They want maximum money and opportunity to get money. The free-to-them welfare stuff they can mooch from the unwilling taxpayer is also desired because it is part of the value added to their big pile of immigrant swag. The biggest truck, the flashiest car to brag about are what it’s all about. Young folks getting college degrees is not a goal, at least among hispanics. (Over half of Asians in the US have college degrees; only 9.1 percent of Mexicans do.)

The newbies never seem to understand that the freedom they see as an American promise is only part of a social contract that is balanced by responsibility. And one responsibility is the expectation of citizens that immigrants assimilate to American values and the English language.

Anyway, in Mexifornia’s capital city of Lost Angeles, the ethnic boosters want their little strips of stores and restaurants designated as non-American zones of ethnic specialness. One flack expressed his race dream this way: “We’re coming here to help and build a bigger identity. . . for all Latinos.”

Of course, if the Hispanics self-deported, er returned to the beloved homelands, they could experience 100 percent national raza identity all day every day. Just a thought…

Below, the proposed map of Hispanic mini-territories. 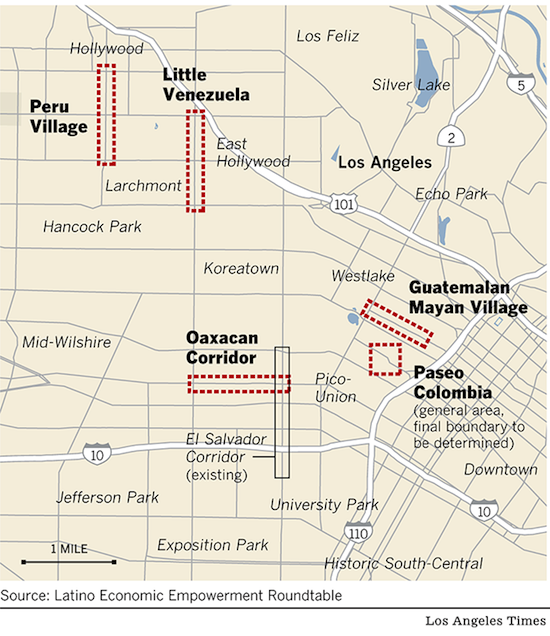 They want to emulate what Asians have done with the likes of Chinatown and Little Tokyo. Proposed communities include Peru Village, Little Venezuela and Paseo Colombia.

Dassler Jimenez stood on a busy stretch of Western Avenue in East Hollywood, ready to plant a flag and call it “Little Venezuela.”

Never mind that none of his countrymen live or own businesses in the neighborhood — or the fact that Jimenez has no money to finance the effort and little clue how to make it happen.

“If the Armenians and the Koreans did it,” Jimenez said, “why can’t we?”

Together, they want to emulate what Asians did with Thai Town, Little Tokyo, Filipino Town and Little Bangladesh. Together, they’re also hoping to keep Koreatown expansion at bay.

The Latino Economic Empowerment Round Table gathers monthly to strategize about boundaries, city requirements and ways to win favor with neighborhood councils, consulates and elected officials.

“This is us uniting and saying, ‘Hey, we contribute. We belong,’ ” said Milagros Lizarraga, leader of the Peru Village effort. “It’s time we are all recognized.”

The area Jimenez wants to transform — along Western from Santa Monica Boulevard south to Beverly Boulevard — is currently lined with budget furniture stores, pot shops and Thai massage parlors. “For lease” signs hang from at least a dozen storefronts.

He looks past the littered sidewalks to the hills of Griffith Park. They remind him of his native Caracas.

All along Western, Jimenez pictures Venezuelan restaurants and shops, murals and banners, a big Catholic church and a lively bar. He wants to turn a vacant store next to the Smart & Final into a community center called Casa Venezuela.

Before he can set his plan in motion, however, he has to persuade some Venezuelans to move into the area.

“They believe and they don’t believe,” Jimenez said. “They can picture it, but then it seems so far away.”

The Venezuelan community, among the newest in Los Angeles, has slowly grown over the last five years because of political unrest back home. They are spread countywide and number about 5,000.

By Jimenez’s count, 14 live near his target area.

A few months ago, he decided to seek support from the Latino roundtable.

Guiding the group is a contingent from El Salvador, which boasts nearly half a million people in Los Angeles — the second-largest Latino population after Mexicans.

Oscar Dominguez, a businessman and community leader, fought for nearly five years at the city and state levels before winning approval to call a 12-block stretch of Vermont Avenue just north of USC the El Salvador Corridor.

Today, banners in El Salvador’s blue and white flag colors hang from light posts. They feature the national bird and flower. Salvadoran businesses line the street, and a nearby elementary school bears the name of a Salvadoran hero.

Before they were able to lay claim to the area last year, Dominguez said, Koreatown proponents had submitted their own plans for it.

“We had to speak up and say, ‘This is already taken,’” he said. “We’re not just laborers. We have businesses, we have restaurants, we have a vision for this place.’”

That vision is not just a matter of cultural pride.

But what marks turf, beyond any doubt, is that blue-and-white sign from the city.

“That seal of Los Angeles is one of the most recognized seals in the world,” Councilman Tom LaBonge said. “It’s the thing that really makes a place official and represents all of us.”

In 2009, LaBonge played referee in a debate between those representing Little Bangladesh and Koreatown.

The Bangladesh contingent wanted to claim a 56-square-block area already staked out by Koreatown — although not officially. Koreatown supporters argued that a Bangladesh designation would harm the area’s businesses. In the end, Little Bangladesh was scaled back to four blocks.

Until 2006, Los Angeles had no formal process for designating neighborhoods. Now, applicants must submit 500 signatures, along with a solid pitch for why the designation is merited.

“What we don’t want to do is to overwhelm other boundaries and have people protesting what was really intended to be a matter of pride,” said Councilman Bernard C. Parks, who oversees the committee that weighs each petition.

Los Angeles is considering a designation for Peru Village, the first application submitted by a member of the Latino roundtable. If approved, a piece of Hollywood — a high-traffic stretch of Vine Street from De Longpre Avenue south to Melrose Avenue — would officially become Peru Village.

About 40,000 people with ties to Peru live in Los Angeles County. And while although they may not be in the proposed area, this was the place where the community lived and gathered in the 1960s and ’70s, when Peruanos first immigrated, Lizarraga said.

To the southeast, in Westlake, Guatemalans too have a history that goes back decades. But their plan to launch the Guatemalan Mayan Village has more to do with saving their neighborhood from the future.

Community leader Yahir Gaitan Ortiz said he hopes culturally cordoning off the area will drive away the gentrification threatening to displace Guatemalans.

He wants West 6th Street, from South Alvarado Street to South Lucas Avenue, to become a mini Guatemala. Businesses will be painted in vibrant colonial colors and a statue of Tecun Uman, the great Mayan ruler, will guard the entrances of the corridor.

“We want people to feel proud,” Gaitan Ortiz said. “We want the city to see us and help us clean up, not push out the families that live here.”

Among the most organized members of the roundtable are those who represent Colombia.

They began searching for a place for Paseo Colombia a year ago, after the consul general in L.A. asked them to create a home base for Colombians in the city.

“But there is no place we can say, ‘This is Colombia,’ “ said community leader Augusto Rojas. “So we had to create an area out of nothing.”

They chose a spot just west of downtown’s financial district after doing a study to find an area that met their wish list: potential for economic growth, off the beaten path, centrally located and needing investment.

The idea is to set aside two blocks and build a Spanish Colonial-style corridor, lined with Colombian restaurants and shops. At the center, they hope to put the Colombian Consulate.

Colombian doctors, accountants, engineers and other professionals are prepared to invest about $4 million to buy land in the zone, Rojas said.

“We don’t want people to think we’re coming here to invade or take over” the area populated mostly by Central American and Mexican immigrants, he explained.

“We’re coming here to help and build a bigger identity — not just for Colombians — for all Latinos.”