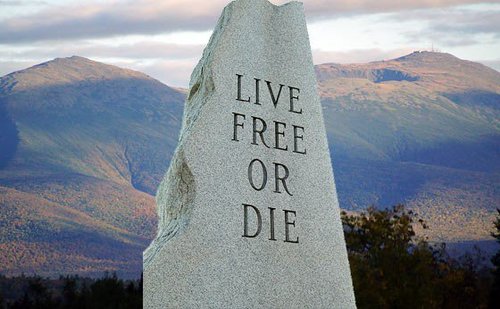 [See Also: University of New Hampshire Language Commissars Say It's Better If You Don't Refer to Your Nationality as "American"]

It appears students at the University of New Hampshire will once again be permitted to refer to themselves as Americans. These days, that's a victory.

The University of New Hampshire (UNH) has renounced a controversial “Bias-Free Language Guide” and removed it from the university’s website.

Now, however, the university has both removed the speech guide from its website—the original URL now takes viewers to page on “Inclusive Excellence”—and UNH President Mark Huddleston denounced it as unrepresentative of university policy.

In a July 29th statement, Huddleston said that he was “troubled” by the guide and found it “offensive.” He went on to clarify that the “only UNH policy on speech is that it is free and unfettered on our campuses.”

A statement from the university on the following day took Huddleston’s remarks one step further, declaring that “[s]peech guides or codes have no place at any American university,” and announcing that Huddleston “has ordered a review of UNH’s web posting policies in the weeks ahead.”

This actually appears to be something more than the usual non-apology issued by institutions after a public firestorm. With the proliferation of "speech codes" and politically correct (and usually anti-white) guidelines on college campuses around the country, it takes no small degree of courage for Mark Huddleston to say "speech guides or codes have no place at any American university." That's the kind of message it would behoove Republican candidates to get behind when it comes time to talk about issues like funding public universities.

Still, the incident shows how deeply entrenched (and extreme) forthrightly anti-American (literally) attitudes are on many campuses. And the controversy over the term "American" (I can't believe I'm writing that) is not going to go away.

After all, it wasn't long ago when Nancy Pelosi declared, "We are all Americans, North and South, in this hemisphere." The current push on college campuses is for the hated gringos to refer to themselves as "U.S.-Americans," because "America is a continent, not a country."

A victory for free speech against the cultural commissars is a good thing. But "free speech" is the weakest reason to push back against this. The real reason this "anti-bias guide" needed to be opposed was because it was a direct attempt to deconstruct our national identity. Unfortunately, look for more of these incidents in the years to come if current demographic trends continue.