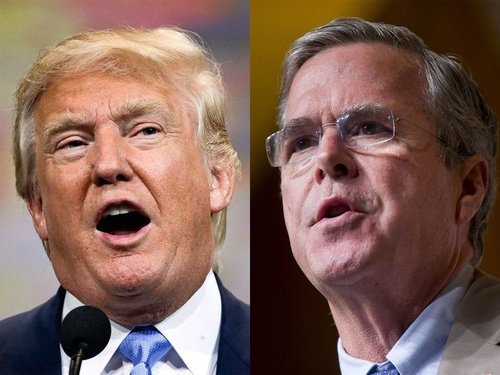 Trump Polls Better With Hispanics Than Jeb Bush Does

As Allan Wall noted, Donald Trump has the highest Hispanic favorability rankings among Republicans, despite the endless slurs of “racism” and “xenophobia” against him. Public Policy Polling, which conducted the survey, has pushed back against Trump touting the poll, by noting the same poll shows him losing 61-28% in a head to head match up against Hillary. [Donald Trump touted a poll that said he'd be an 'unmitigated disaster' against Hillary Clinton, by Colin Campbell, July 29, 2015]

As I will note in an op-ed tomorrow, that still is quite good, and certainly not much worse than the pro-amnesty Republicans he’s running against.

Yet what the polling company did not mention is that in a 3 way match of Trump vs. Hillary and Jeb, Trump beats Jeb among Hispanics 25%-21% as well as African Americans 8%-2%. [Trump Still Leads National GOP Field, But Disaster in General, July 22, 2015].

Think about it, the man who the media, the Mexican government, virtually every Democratic and most GOP politicians etc. all slur as the embodiment of anti-Hispanic racism would beat the most pandering, pro-amnesty, Republican who brags of his Spanish speaking wife and children and even pretends to be Hispanic, running as a Third Party candidate.

But yes, let’s listen to the consultants who say the GOP must support amnesty to win the Hispanic vote.