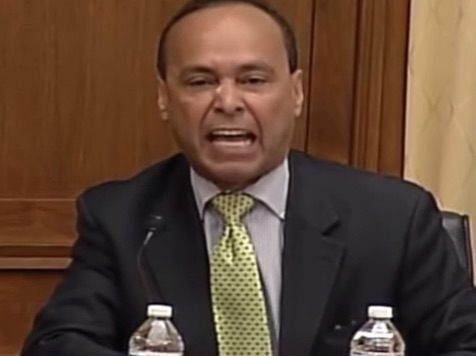 A few weeks ago, Congressman Luis Gutierrez (D-La Raza) belittled the death of Kate Steinle at the hands of an illegal immigrant who had been deported multiple times. Of course, he did it in Spanish on the television network Telemundo.

REP. LUIS GUTIERREZ: Every time a little thing like this happens, they use the most extreme example to say it must be eliminated. [Rep. Luis Gutierrez calls murder of Kate Steinle a "little thing" on Telemundo, by Yuri Perez, Newsbusters, July 16, 2015]

Democratic Rep. Luis Gutierrez (D-IL) used his time testifying before the Senate Judiciary Committee on Tuesday to furiously denounce the Center for Immigration Studies' Jessica Vaughan, after she turned his dismissal of Kathryn Steinle's murder as "a little thing" against him...

“As someone who has also lost a close family member,” Vaughan said, “my brother, because of a negligent act by a sworn law enforcement officer and also a bad policy — and I should add that the offense that was committed was one that some on this committee would call a ‘minor traffic offense’ that killed my brother, I have to say that it is really not OK to refer to these tragedies as a ‘little thing,’ as one member of this committee has.”

“‘I want to say to you, Mr. Gowdy, that I feel the same anguish and pain that I know the secretary does, and every American should at the death of that woman,'” he read. “That nobody has come here to look for excuses or anything else. I mean, this is a career criminal we have on our hands… This man is not an immigrant. Immigrants come here to work hard, sweat, and toil,” he read in staccato, before rushing on: “We should be warm and welcoming them; this man is a foreigner who has come to cause damage...”

But of course, it's important to remember that Luis Gutierrez is actually a far-right, xenophobic, ultra-patriotic nationalist with an expansionist vision for his people. Unfortunately for Americans, his loyalty and identity have nothing to do with this country and our people.

This was a deeply disingenuous thing for Gutierrez to say about Steinle’s murder: In English, he said he could “only imagine the grief her family is feeling” on the Congressional record. One week later, he said in Spanish her death was “a little thing.” Politicians talk out both sides of their mouth, but thanks to mass immigration, the U.S. can see its elected representatives do so in different languages.

If present immigration trends continue and the United States of America continues its degeneration into a hodgepodge of feuding ethnic tribes, we will see more of this. It's already bipartisan - Jeb Bush also tells Spanish language audiences one thing while telling Anglo-Americans something else entirely.