Argentine soccer superstar Lionel Messi is one of the rare athletes whose use of a normally banned performance enhancing drug, human growth hormone, is frequently celebrated as heartwarming. Synthetic HGH was invented for extremely short kids like Messi, whose doctors were projecting he wouldn’t grow up to exceed 4’7?. So, as an adolescent Messi began three years of daily injections into his legs.

But HGH was very expensive, so his blue-collar family of six in Rosario went to their local professional soccer club, Newell’s Old Boys (part of that ancient Anglo-Argentine love/hate affair that includes the Falkland’s War and Diego Maradona’s famous two goals against England in the 1986 World Cup: the cheating Hand of God and the subsequent Goal of the Century). But Newell’s wouldn’t pony up the monthly money, so the 13-year-old Messi signed with famous FC Barcelona in Spain. 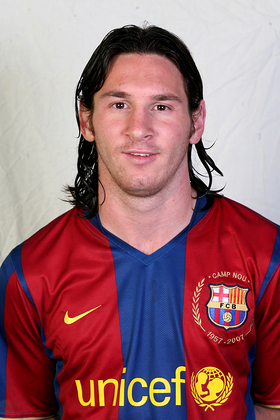 With the help of HGH, he wound up growing to 5’6? or 5’7? but still with a very low center of gravity — he flops less than most soccer players, presumably on the theory that if he can stay on his feet he’s likely to control the ball, and when he controls the ball, good things tend to happen.

Judging from this rather unflattering photo, the HGH likely had some impact on his now not very delicate skull shape. Presumably, the HGH gave him some benefit in muscularity in junior play while he was taking it. But his remarkable talent at ball-handling and seeing what will happen next was already evident, which was why FC Barcelona was buying it for him.

Of course, all that raises the question of whether Messi, four time world player of the year, has ever taken any HGH or other PED since ending his course of therapeutic treatment as a youth.

In general, soccer players aren’t as freakish looking as some American, Olympic, and international sports stars. But that doesn’t prove everybody’s clean. Perhaps the more balanced demands of the game encourage more modest PED use?

By the way, although Messi scores more goals than anybody other than Cristiano Ronaldo, he appears averse to then ripping his shirt off in triumph like so many other soccer stars. For an Argentine athlete of largely Italian descent who lives in Spain, there are a relative lack of pictures of him shirtless. Whether this is calculated to cover up either impressive or unimpressive musculature is unknown to me. Or perhaps he just has a sense of sporting dignity?

It would be nice if all the experimentation with PEDs going on at sports facilities around the world ever contributed to an increase in medical knowledge, but probably most of the lessons learned will be lost to secrecy.