Liberal v. Conservative: Is It Genetic?

HBD Chick [or hbd chick] is reviewing Avi Tuschman‘s Our Political Nature: The Evolutionary Origins of What Divides Us. In the comments, I found this:

Rather, what has happened [is] the political process has worked to produce two large political factions which are able to compete with one another (there’s more in proportionate representation democracy but they have to form coalitions so it's functionally similar).

Each of these large political groupings must market itself to a large section of society and attract functionally high performing people who are willing to talk the ideological talk well, in order to stay competitive.

It seems like, partly, the way one of these does this is by manufacturing ideological statements which appeal to people who are open-minded, smart, tend towards social anomie / cosmo rootlessness and have high abstract and unconventional thought. The way the other does this is by attracting people who are highly disciplined and achievement oriented, socially connected in their communities and pragmatic. Looking across human societies, this seems like a really common way for two ideological coalitions to form.

And of course, because these traits are embodied physically in the brain and in the genetic code, there are genetic and physical correlates.

However, the end result isn’t that either of these political groups actually puts their ideology into practice, but more that they sell off their decisions and stances for money to various stripes of bourgeois-capitalist organisation, with ideology providing some constraints as to how they do so.

[Jonathan] Haidt is utterly correct that (at least many of) the personality dimensions which underlie political differentiation have evolutionary explanations, but (at least most of) their clustering together to form political positions is driven mainly by the political process (which is mostly a sham for a process controlled by money and interests) NOT an a priori clustering which falls out of evolutionary logic.

In case you are wondering who "Matt" is, well, there are a whole bunch of high IQ Matts these days. "Matt" is the new "Steve." 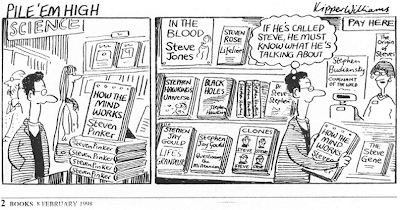 It might be interesting for my readers to evaluate themselves on Matt's dimensions:
Liberals (at least at the high end):
1. open-minded
2. smart
3. tend towards social anomie / cosmo rootlessness
4. high abstract thought
5. unconventional thought.
Conservatives:
6. highly disciplined
7. achievement oriented
8. socially connected in their communities

For example, I'd say that while I endorse all the conservative virtues, I am not personally all that disciplined, achievement oriented, connected, or pragmatic.

On the other hand, for somebody who is high in #5 (unconventional thought), I'm lacking in #3 (alienation).

The other odd thing about me is that I'm relatively low in #4 (abstract thought). Instead, I'm high in example-based thinking. I'm not very good at thinking in purely abstract terms, but I can come up with a large sample size of examples, from which I can sometimes extract more general lessons.

For example, when presented with the Trolley Problem—if it's moral to push a lever that will kill one person to save five lives, why are we more reluctant to push a fat man on to the tracks to save five passengers? — I immediately start churning through examples until I come up with the fattest fat man I can think of (the Samoan sumo wrestler Konishiki). From thinking about trying to murder Konishiki with my bare hands, I conclude that it would really hard (and imprudent) for me to push Konishiki to his death, so maybe I shouldn't try. And from there, I reason more generally that maybe it is a good thing that human beings seem to have a prejudice against starting lethal brawls with guys bigger than themselves.