Let’sGoBrandon: Forget The Vets, Send VA Docs To The Border To Care For Illegals. Oh, And No Vetting Either. Border Patrol Will Handle 3.4M By Fiscal ’22’s  End

President Biden knows what’s coming if the GOP takes control of Congress: impeachment, possibly, then removal from office, not least for his border treason. That means he and his open borders gang must brown the country while they can, and it explains the latest from inside the regime. To help handle the expected rush of penniless illiterates after Biden lifts Title 42, medical personnel from Veterans Administration hospitals will go to the border. Even worse, Fox News’ Hillary Vaughn has reported in a long Twitter thread, immigration officials will create a smartphone app on which the “migrants” can register their arrival. That means no more vetting.

🚨One idea being floated: pulling medical personnel from Veterans Affairs to assist “We’re going to take medical services away from people that really deserve that. Who went to combat…to give free medical attention to illegal migrants” CBP source tell me.

Regime officials predict that 500,000 illegals will overwhelm border agents in the six weeks after Biden rescinds the implementation of Title 42, Vaughan reported. That’s not 18,000 a day, a figure regime officials have bandied about, but it’s bad enough: 11,000 per day.

“There’s not enough people going around. It’s literally going to be a revolving door. Getting people in—getting people out,” an official told Vaughan.

Thus, the plan to siphon VA personnel from their job, caring for veterans:

CBP source says DHS is trying to figure out how to get enough medical personnel to provide the COVID vaccines the Biden administration promised migrants—as well as staff to handle any medical issues many migrants will have.

One idea being floated: pulling medical personnel from Veterans Affairs to assist “We’re going to take medical services away from people that really deserve that. Who went to combat…to give free medical attention to illegal migrants” CBP source tell me.

But worse still and quite frightening is this: Vetting these illegals, as a practical matter, won’t happen.

🚨This CBP source tells me that due to the wave of migrants they are expecting after Title 42 lifts - Biden Admin is looking at doing NTA’s (notices to appear) with “minimal biometric data and vetting” to expedite processing.

The regime will pass out NTAs—or notices to appear for an immigration proceeding—with “‘minimal biometric data and vetting’ to expedite processing,” Vaughan disclosed:

This CBP source tells me that could mean skipping critical paperwork and vetting that would confirm they have the right name and date of birth for the person entering.

A CBP source tells me the Biden Admin is also looking at deploying a smart app for migrants to use to submit to pre-screening. There is talk of expanding the “CBP1 App” for migrants so they can submit pre-screening prior to approaching a point-of-entry.

CBP source tells me the Biden administration is preparing for double the number of migrants that came in 2021—in the year after Title 42 lifts—“I would say its conservative to say double what came in last year.” 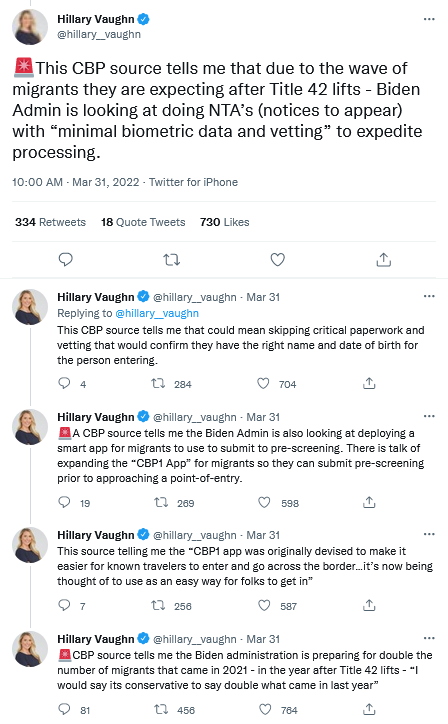 If that last prediction comes true, border agents will arrest or encounter about 3.5 million illegals by the close of fiscal 2022 in September. 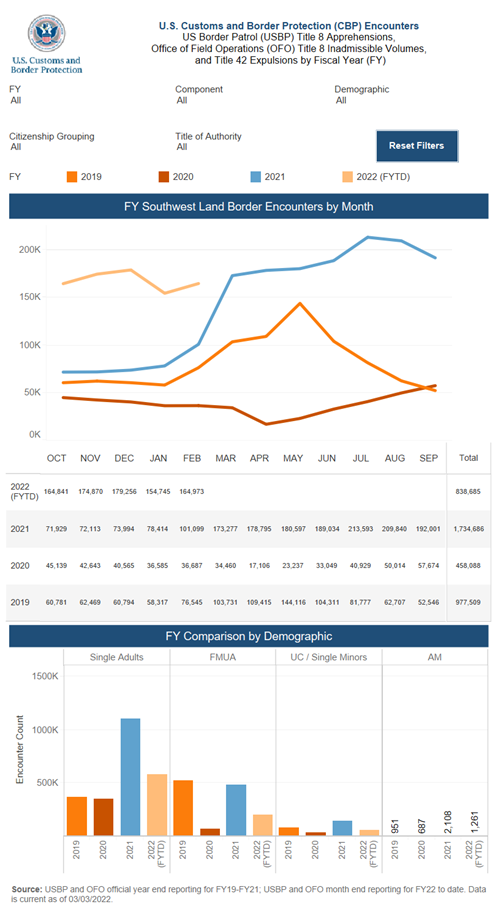 No vetting is no surprise. Homeland Security Secretary Alejandro Mayorkas openly brags that he will not enforce immigration law. Even naturalization fraud, he has said, will not invite not deportation [EXCLUSIVE: DHS drafts plan to allow fraudsters to keep citizenship, by Stephen Dinan, Washington Times, October 13, 2021].

Then again, Mayorkas, a Cuban-Jewish immigrant, has a natural affection for visa fraudsters. He was caught finagling visas for rich foreigners when he worked for the Obama Regime.