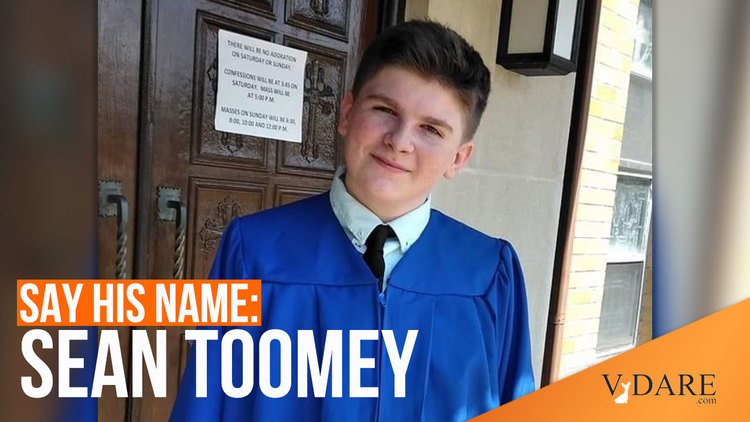 His Name Is Sean Toomey: While Grabbing A Bottle Of Water From His Dad's Car In Philadelphia, 15-Year-Old White Male Murdered By Group Of Black Criminals

We all know if Philadelphia were 100 percent white, the city would have virtually no homicide or nonfatal shootings.

But Philadelphia is not 100 percent white. And with a population that is more than 60 percent People of Color, Philadelphia is one of the most violent in America. And it earns that ignominious honor exclusively because of non-whites, particularly black males.

Well, if Philadelphia were 100 percent white, Sean Toomey would still be alive. He was a white 15-year-old teenager who went to grab a bottle of water from his dad’s car when he was shot by blacks engaging in criminality in his community.

Philadelphia Teenager Fatally Shot in Head While Grabbing Water from Car Outside His Home, by Christine Pelisek, MSN.com, March 29, 2022

A Philadelphia teen was shot in the head while grabbing water from his father’s car outside his home.

Sean Toomey, 15, was shot around 9:10 p.m. Thursday in Northeast Philadelphia, police said. He died at a local hospital the following day.

Toomey, a former Mercy Career & Technical High School student, was getting a case of water from the car when gunfire erupted.

“I heard the two pops and I thought it was firecrackers,” Sean’s father, John, said, ABC6 reported. “But it only takes a second to grab some water and get in the house and he wasn’t coming back in. So, I got curious, I put my sweatshirt on, and I went outside, and I saw him lying on my neighbor’s lawn.”

Police said the shooting may be connected to at least two attempted robberies in the area.

Homicide Capt. Jason Smith said Monday that a group of three men first attempted to rob a woman at an ATM machine around 9 p.m., the Philadelphia Inquirer reported. The same men then attempted to carjack a woman pulling into an apartment building parking lot, Smith said. The group fled after noticing her son in the backseat, according to the Inquirer.

The woman told police that shortly afterwards she heard a series of gunshots.

No arrests have been made.

Toomey’s father John told CBS3 that his son was a quiet kid who liked computers, football and basketball.

“He liked his computer,” John said. “He liked watching the Eagles. He knew a lot about sports. He was a quiet, nice kid.”

“I’m probably going to move out of here,” he said. “You know, I was born and raised in this neighborhood. Now, kids are getting shot on the streets.”

His name is Sean Toomey. Yet another white individual murdered by blacks in a country we used to call the United States of America. Now, in the Current Year, we condemn white people for collectively creating this country that dared oppress People of Color.