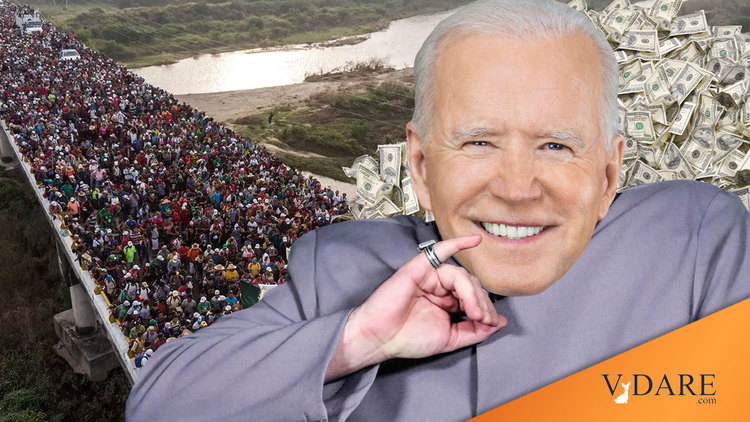 The forthcoming illegal-alien invasion when President Brandon lifts Title 42 has been for the past week the most talked about aspect of his regime’s border treason. But the immigration section of Traitor Joe’s recently fiscal 2023 budget explains in more detail how Biden plans to move forward with The Great Replacement. He’ll import as many refugees as he can, and not deport as many illegals as he can.

Under a subheading titled “Strengthening America’s Immigration System,” Biden proposes a four-part plan to continue browning the country and dispossess and replace the Historic American Nation.

Biden’s proposed budget for Fiscal Year 2023 includes spending billions in American taxpayer money on lawyers for border crossers and illegal aliens to help them fight their deportations from the United States. https://t.co/4W06z120dS

Under Ensures a Fair and Efficient Immigration System, we learn that Biden will spend $765 million so United States Citizenship and Immigration Services can bring in as many refugees and immigrants as possible. USCIS will use that money to “to efficiently process increasing asylum caseloads, address the immigration application backlog, and improve refugee processing.”

Then comes Supports America’s Promise to Refugees. The Office or Refugee Resettlement receives $6.3 billion “to help rebuild the Nation’s refugee resettlement infrastructure and support the resettling of up to 125,000 refugees in 2023.”

Biden will also accommodate all those “unaccompanied minors” we read so much about:

The Budget would also help ensure that unaccompanied immigrant children are unified with relatives and sponsors as safely and quickly as possible and receive appropriate care and services while in ORR custody.

Under Improving Border Processing and Management, Biden provides $24.3 billion to Immigration and Customs Enforces and U.S. Customs and Border Protection for more “border security” and “to enforce the immigration laws.” Presumably, he means the same laws that he and his Cuban-Jewish Homeland Security chief, Alejandro Mayorkas, have bragged about not enforcing.

Then comes the $6.4 billion to keep illegals in the country:

Improves Immigration Courts. The Budget invests $1.4 billion, an increase of $621 million above the 2021 enacted level, in the Executive Office for Immigration Review (EOIR) to continue addressing the backlog of over 1.5 million cases that are currently pending in the immigration courts. This funding supports 100 new immigration judges, including the support personnel required to create maximum efficiencies in the court systems, as well as an expansion of EOIR’s virtual court initiative. The Budget would also invest new resources in legal access programming, including $150  million in discretionary resources to provide access to representation for adults and families in immigration proceedings.

Complementing this new program is a proposal for $4.5 billion in mandatory resources to expand these efforts over a 10-year period. Providing resources to support legal representation in the immigration court system creates greater efficiencies in processing cases while making the system fairer and more equitable.

As I’ve written before, if Biden were merely “incompetent,” he would do the right thing at least occasionally, if only by accident. But on immigration, he always moves to bring in more illegals and refugees. That includes, again, not enforcing the immigration laws he is sworn to uphold.

That is not incompetence. That is treason.