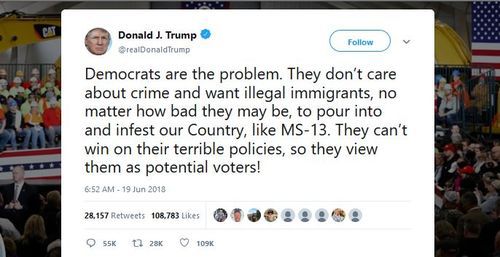 In the letter, institute president Ryan Williams explains, "Today, the Claremont Institute is focused more than ever on how to think about this critical political moment in our nation's history.  And what it means for the future of limited government and American constitutionalism."

All well and good—indeed, I'm a (very modest) donor.  More intriguing, though, is a later statement in Williams's letter about how the institute's Center for Constitutional Jurisprudence is weighing in, with amicus briefs, on cases before the U.S. Supreme Court including:

Trump v. Hawaii -- In this case, we are supporting the administration's executive authority for national security executive orders blocking immigration from terrorist-infested countries.

Terrorist-infested!  How refreshingly appropriate!  We can be confident that George Orwell would approve.  As he wrote in a famous essay, "Politics and the English Language":

Political language — and with variations this is true of all political parties, from Conservatives to Anarchists — is designed to make lies sound truthful and murder respectable, and to give an appearance of solidity to pure wind.

President Trump has made a bunch of splashes with blunt language on immigration-related matters that have noisily horrified the chattering class.  He may or may not have classified some unspecified Third World countries as "sh*tholes," but in mid-May he definitely likened MS-13 gang members to "animals."

(The latter utterance provoked a burst of virtue-signaling from Ed Stafman, a rabbi here in Bozeman, Montana, who claimed to be "heartsick" over it.  Trump's statement is obviously unfair to animals, but that's clearly not what this sanctimonius rabbi meant.)

And on Monday, June 18, Trump created a new stir by saying "The United States will not be a migrant camp ..."  This set off an exercise in point-and-splutter by one of the "explainers" at Vox [Trump: the US will not turn into a “migrant camp” or “refugee holding facility”, by Tara Golshan, June 18, 2018] who went on to "argue":

In other words, the Statue of Liberty’s famous inscription of “Give me your tired, your poor, your huddled masses yearning to breathe free” be damned.

So Golshan's one of those "explainers" who needs to have the basics explained to her.

Anyway, Trump's use of "migrant camp" merely suggests that he's catching up with VDARE.com's own Brenda Walker, who for years has been characterizing America's de facto immigration policy as "flophouse for the world."

And his general bluntness is utterly refreshing, as Mark Steyn laid out in detail after attending a Trump campaign rally in Vermont early in 2016.  In a section of the article titled "MESSAGE DISCIPLINE," Steyn wrote:

At some point, [Trump] mused on a Martin O'Malley rally [O'Malley is a recent governor of Maryland and was one of those competing for the Democrats' 2016 presidential nomination -- PN] at which apparently only one person showed up. So O'Malley talked with him one on one for an hour, and at the end a reporter asked the guy whether he would be supporting O'Malley. And the fellow said no.

And we all laughed, as did Trump.

Now, short of the mullahs nuking Hillary in Chappaqua and the following day Kim Jong-Un nuking Bernie in Burlington, there is no conceivable scenario in which Trump will be facing off against Martin O'Malley. So talking about him is a complete waste of time - and Karl Rove says that campaigning is all about the efficient use of the dwindling amount of time you have this close to Iowa and New Hampshire. So doing ten minutes of knee-slappers on Martin O'Malley is ten minutes you could have used to talk about Social Security reform that you'll never get back.

Maybe Rove is right. But as a practical matter it's led to the stilted robotic artificiality of the eternally on-message candidate - which is one of the things that normal people hate about politics. And Trump's messages are so clear that he doesn't have to "stay on" them. People get them instantly: On Thursday he did a little bit of audience participation. "Who's going to pay for the wall?" And everyone yelled back, "Mexico!" He may appear to be totally undisciplined, yet everyone's got the message. Likewise, his line on an end to Muslim immigration "until we can figure out what the hell's going on" is actually a subtle and very artfully poised way of putting it that generates huge applause. Trump has such a natural talent for "message" that it frees up plenty of time to do ten minutes of Martin O'Malley shtick.

Of course, there's abundant blunt talk in online comments threads, often involving pseudonymous authors.  But sometimes the commenters use what look to be real names.  Such was the case with a comment by one Patricia Canon at Campus Reform's article (Harvard Medical School ashamed of white male department heads, by Toni Airaksinen, June 15, 2018) about the removal of the portraits of former department heads from an amphitheater associated with Harvard Medical School because all 31 were men, with 30 white and one Chinese.  Wrote Canon:

Harvard, founded in 1636 by white men, built and developed for centuries by white men, and turned into one of the most prestigious unveristies in the world -- by white men. If new immigrants don't like the sight of white people, why do they come to America? Let them be offended. This is OUR history. I predict in future decades non-whites will be claiming that they created it. White history is being erased and it is not incidental. Not that I care who founded it. I care about the attack on European people and on our history. This is wrong.

I made Ms. Canon's first point at greater length in a blog post here two summers ago that was frankly titled, "White Privilege": One Of The Stupidest Ideas of Our Time.