The rumble is growing from nations in Eastern Europe that they will not submit to Muslim immigration being forced upon them by the EU bureaucrats in Brussels. Memories are long in the east, where barbaric Islamic rule under the Ottomans lasted for centuries. (One practice, Dershirme — the kidnapping of Christian boys for a life of military service — is but one example of muslim oppression.)

Eastern Europeans don’t want hostile muslims dumped in their countries, because they’ve been there and done that. Plus the new threat is huge, with millions of jihadists fired up and on the march. Hungary’s Prime Minister Viktor Orban recently remarked, “Migration turned out to be the Trojan horse of terrorism.”

On September 13, 2015, thousands of Poles rallied in Warsaw to protest the EU’s open borders, with slogans like “Islam will be the death of Europe.” 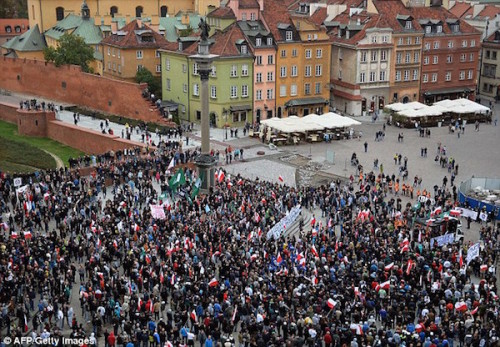 For resistance against Brussels, there is strength in numbers, as more countries line up to deny the EU’s forced migration mandate:

The Czech Republic has joined its Central European neighbors in officially announcing a withdrawal from the European Union’s 2015 migrant resettlement program.

After much criticism of the scheme, which seeks to resettle an initial 160,000 migrants from Italy and Greece across EU member states, the Czechs have finally withdrawn citing concerns over security and the ‘’dysfunctionality’’ of what has been criticized as a shambolic program.

Prague had accepted only 12 of the 1,600 migrants required by Brussels before leaving the program, which imposes quotas on all 28 member states under threat of sanction.

Naturally, no good deed goes unpunished by authoritarian multiculturalists, and EU honchos mean to smack down any resistance against their toxic diversity scheme, as noted by the Guardian (6/13): EU takes action against eastern states for refusing to take refugees. Brussels is bringing a court case against Poland, Hungary and Czech Republic, and what’s the worst it could do? Demand fines? If a worsened argument hastens a further breakup of the European Union, that would be an excellent outcome for all.

Furthermore, it’s not just Eastern Europeans complaining about the EU’s forced immigration: a new poll from Pew Research found that Europeans in general overwhelmingly want their national governments to determine who enters, not Brussels.

Vaclav Klaus, the former president of the Czech Republic, is a famous defender of national sovereignty:

He recently made a statement calling for a Czech exit from the EU:

VACLAV KLAUS: This is a proclamation of the IVK (Institute of Vaclav Klaus), that is, my own proclamation regarding the treatment, the unacceptable treatment of the Czech Republic by the European Union. We fundamentally and resolutely protest the decision of the European Union to initiate towards the Czech Republic proceedings regarding so-called “not respecting” the receipt of migrants on the basis of quotas dictated by Brussels.

We are protesting the attempt to punish us and to force us into obedience. To those who had not yet realized it: by taking this step, the European Commission has shown exactly what the standing of the Czech Republic in the European Union is, and what are the intentions of its top representatives towards us. We reject the continued belittling of us, which has now, on the 13th of June, happened. This is no banality. This is a new, up until now unseen thing.

We reject the aim of the mandatory settlement of foreigners within the territory of our State. We refuse to permit the transformation of our country into a multicultural society of inassimilable communities, as we currently see in France and in Great Britain. And I do not even mention mass migration-connected — as of today almost daily — terrorism.

Practically, our presence has no real meaning. Our voice is ignored. The decisions are not made in accord with us, they are made about us. [echoing the Munich accord of — translator].

Let us not give in to blackmail that uses the threat of terminating European subsidies. We do not need subsidies, and we do not want them. We reject both, our payments to Brussels, and the subsidies from Brussels. We reject this malignant policy promoted by force by the European Union as a whole.

From all of this There follows only one possible — and at the same time, the only necessary — conclusion: the time has come to start preparing the exit of our country from the European Union. This is the only path for our State, which we have inherited from our ancestors and which it is our duty, as a self-owned entity, to hand over to future generations, to maintain it and to rescue it.