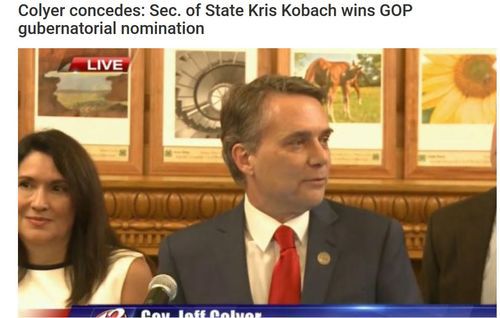 This isn't a huge suprise, as immigration patriot Kris Kobach was leading after the polls closed in the GOP primary the other day. Still, it is finally over, and Kris Kobach will be the gubernatorial candidate in the state of Kansas for the Republican Party.

I've just had a conversation with the Secretary of State and congratulated him on his success and repeated my determination to keep this seat in Republican hands. This election may be the closest in America. But the numbers are not there.

Kansas is too important. Tracey and I will not challenge this in court, nor will we ask a recount. Right here and now we endorse the winner Kris Kobach and Wink Hartman.

This is another race where President Donald Trump's endorsement made the key difference. President Trump broke with his staff and endorsed Kobach just before the primary vote. Obviously, it was that endorsement which pushed Kobach over the top.

Kris Kobach, a strong and early supporter of mine, is running for Governor of the Great State of Kansas. He is a fantastic guy who loves his State and our Country - he will be a GREAT Governor and has my full & total Endorsement! Strong on Crime, Border & Military. VOTE TUESDAY!

Kobach, perhaps the most prominent immigration patriot in the country other than the president, which explains why the mainstream media has been screaming in outrage about his candidacy [How Kris Kobach could make Kansas crazy again, by Bob Moser, Rolling Stone, August 6, 2018]. Though Kansas is a very Republican state, the gubernatorial race is expected to be close. This is the main race to watch in 2018 in the states.