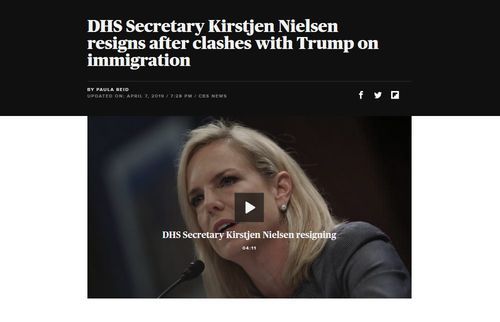 The wicked witch of DHS is dead and buried beneath the border melt-down that she created!  Apparently Stephen Miller is the new, unofficial, Border Czar.  One can only hope that your humble correspondent’s work exposing Lady DACA and her band of traitors and saboteurs in the Resistance had some effect.   The border collapsed on her watch, good riddance.  The only question is who succeeds her? Tom Homan? Kris Kobach?

Department of Homeland Security Secretary Kirstjen Nielsen is resigning, U.S. officials familiar with the matter told CBS News and President Trump soon confirmed in a tweet. The announcement comes after Nielsen was set to meet with the president at 5 p.m. at the White House.

“Secretary of Homeland Security Kirstjen Nielsen will be leaving her position, and I would like to thank her for her service,” Mr. Trump tweeted Sunday. “… I am pleased to announce that Kevin McAleenan, the current U.S. Customs and Border Protection Commissioner, will become Acting Secretary for @DHSgov. I have confidence that Kevin will do a great job!”

Nielsen’s imminent departure is a part of a massive DHS overhaul engineered and directed by top Trump adviser Stephen Miller, according to a senior U.S. official. It’s unclear whether Nielsen is deciding to leave voluntarily, or whether she has been pressured to resign. Nielsen has served as DHS secretary since December 2017, and questions about how much longer she might last have swirled for months as the president voiced his mounting frustrations over illegal immigration levels.

Nielsen’s exit also comes after Mr. Trump announced he wants to go in a “tougher” direction in his nomination for the Immigration and Customs Enforcement (ICE) director, after originally announcing Ron Vitiello would head ICE.

One U.S. official told CBS News is it unlikely McAleenan would be nominated as Nielsen’s permanent replacement.

There does not appear to be a real reason behind the issue with Vitiello.  The rap on him appears to be based on a couple of tweets, one against President Trump, one DR3ing on the Democrats as the “real racists.”  While that is Boomer tier conservativism, he was promoted under Trump and nominated for Director of ICE despite those two tweets.

During the 2016 presidential campaign, on Twitter, Vitiello compared Trump to the cartoon character Dennis the Menace and in another post likened Democrats to the Ku Klux Klan. During his confirmation hearing, Vitiello apologized for the tweets and said they were meant as jokes.

But this may signal a turn for Trump after this disastrous last week where he threatened to close the border, then backed down like Jimmy Carter.  Miller may lead a renewal in effective policy making, like closing the border and deploying the military.  Hopefully Miller is reading VDare and Federale as it appears he is getting the facts, but having to battle the Resistance and Lady DACA.

In recent months, as unauthorized border crossings have soared to their highest levels in more than a decade, Miller has been criticizing Vitiello to the president and looking for an opportunity to cut him loose, according to a senior administration official who works on immigration enforcement matters.

Trump has imbued Miller with more authority over border security and immigration matters than ever before, according to two senior administration officials who spoke on the condition of anonymity to discuss fissures in the administration made worse by the surprise move against Vitiello.

So, Miller will be the unofficial Border Czar.  He should be prepared though.  Already the long knives are out for him, now blaming him for the failures of Lady DACA.

“Ron Vitiello has spent as much time defending our nation’s borders as Stephen Miller has been alive,” one official said of Miller, who is 33.

One senior official said: “This is part of an increasingly desperate effort by Stephen to throw people under the bus when the policies he has advocated are not effective. Once it becomes clear that Stephen’s policies aren’t working, he tells the president, ‘They’re not the right people.’ ”

I would suggest he move quickly against others in the Administration who are sabotaging immigration enforcement, Javanka and Mercedes Schlapp.

There are at least two in the Trump Administration, two who don’t want the President to succeed.  This is typical of the problem President Trump has had with appointees, most don’t or did not support him, especially not his announced immigration policy, the policy he instinctively goes to, as opposed to that which the Swamp forced on him.  Note his instinctive belief that the border should be closed, but Javanka, Schlapp, or others got to him quickly.

Trump has imbued Miller with more authority over border security and immigration matters than ever before, according to two senior administration officials who spoke on the condition of anonymity to discuss fissures in the administration made worse by the surprise move against Vitiello.

This will be a battle for the soul of the Trump Presidency.  Time for Miller to see that the new head of DHS and ICE remove the Resistance, people like Thomas Freeley, Charles Perez, Joseph Macias, and Ryan Spradlin,  as well as the 19 Backstabbers in ICE SVU.  The swamp in DHS must be drained for Miller to rescue the Trump Presidency.  Stephen Miller, ¡Se Puede!  Move now, close the border!