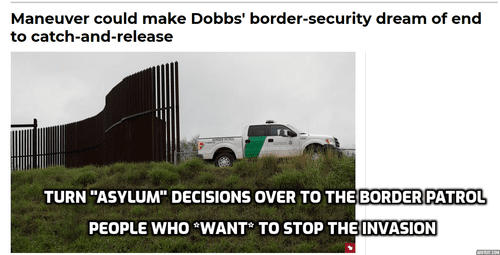 How To Deal With The Border Asylum Crisis? Make Some Border Patrol Agents Into Asylum Officers, Says Brandon Judd.

Even if we could wall off the entire border today, it would still not solve the problem of our asylum/catch-and-release system, which is driving the current run on the border.

But Brandon Judd, president of the National Border Patrol Council, has proposed a solution. I hope somebody in the administration is reading this.

Judd's proposal appeared as an analysis/opinion piece in the Washington Times. Judd writes that

Recently on his Fox Business Network show, Lou Dobbs decried the state of border security and illegal immigration. His anger was palpable and his points were spot on. With evidence in hand, Fox News reporter William LaJeunesse responded to Mr. Dobbs, stating “Customs and Border Protection basically raised the white flag.” Both Mr. Dobbs and Mr. LaJeunesse seemed to be stuck in my 21-year Border Patrol nightmare. I love my job as a Border Patrol agent, but the nightmare, as Mr. Dobbs aptly pointed out, is the lack of political will to enact policies and programs that will secure the border and end the catch-and-release program once and for all.

So what is Judd's proposal?

Political pundits, talking heads, scholars and politicians have convinced the American public that only legislation can solve the problem. They say there are too many immigration and asylum loopholes preventing the government from deporting illegal border crossers in a timely manner. They are all wrong. Mr. Dobbs is about to get the “ingenuity, adaptiveness, and innovation” that he demanded.

The catch-and-release program – the catalyst that drives the current illegal immigration crisis – has proven to be a complex issue. As human beings, we tend to believe complex problems require complex solutions.

In this case, however, the answer is simple and has been right in front of our faces all along: Cross-designate and train Border Patrol agents at the senior patrol agent level as asylum officers with limited authority to conduct “credible fear” interviews.

By so doing, DHS eliminates part of the bureaucratic process that makes the government move at a snail’s pace. It will alleviate a lot of the backlog that jams up the immigration court system, all the while acting under current authority without the requirement of new legislation.

Sounds great. Designate some senior border patrol agents as being asylum officers as well as border patrol officers, thereby speeding up the process.

Like I say, I hope somebody in the administration is reading this.

Unless Congress has specifically addressed how to carry out a particular law, an executive agency is entrusted to interpret the law and implement policies to execute the law. Under a principle established by the Supreme Court in 1984 (“Chevron Deference”), courts must defer to the federal agency’s interpretation of the statue unless it is unreasonable. Asylum and deportation proceedings are civil administration actions, not criminal. Therefore, DHS has the right to establish fear thresholds. Unlike in a criminal proceeding, where the government must prove its case, the burden of proof falls on the illegal border-crosser to provide proof establishing a credible fear.

If the “credible fear” process begins upon arrest by Border Patrol agents, instead of at a later interview before an asylum officer, the process will be much more efficient. If an asylum-trained senior patrol agent determines that the alien has not established a credible fear, an order of expedited removal can be issued, and the illegal border-crosser can be removed immediately. The illegal border-crosser does have appeal rights, but by regulation an immigration judge must hear the case within 10 days of the person asking for reconsideration. Again, because this is not a criminal proceeding, the burden of proof remains on the illegal border-crosser, not the U.S. government.

If no credible fear is established, the process would take no more than 10 days instead of the 2 to 5 years it now takes to deport an illegal border-crosser who claims asylum. This simple adjustment would end catch-and-release.

Illegal immigration dropped to 45-year lows in April 2017 based upon the promise to end the catch-and-release program and deport illegal border-crossers in a timely manner. President Trump and intelligent senior policy advisors at the White House have been tirelessly working toward that end. As a law enforcement officer, I believe in due process. By cutting bureaucratic steps while still adhering to the law, this initiative provides the illegal border-crosser the necessary due process while helping to ensure an orderly immigration and asylum system.

We should never wave the white flag of surrender to illegal immigration.

Exactly. The administration has just seemed too defeatist of late. How about just enacting Brandon Judd's suggestion and start doing that? You don't have to advertise it. But the word would get back to Central America eventually.

We don’t even need cooperation from Mexico, Guatemala, El Salvador, or Honduras.

And that's just as well, as we may not get it anyway. We can't depend on other countries to secure our border.

We need to act with boldness and within the current laws. Solutions are there for those who truly wish to find them. Mr. Dobbs stated, “use ingenuity.” That ingenuity is on its way, and Mr. Dobbs‘ dream of ending catch-and-release will shortly come to pass.

I hope you're right.

The talking point about the broken laws, in the media and even from the administration, have been so incessant and emphatic that most people probably think the laws require open borders unless Congress votes to change them. In fact, our laws are very clear that people who come to our border without proper documentation are all illegal aliens and must be deported. In 1996, Congress further updated those laws to preclude endless lawsuits. In recent years, though, past administrations have taken discretionary exceptions to this rule in the Immigration and Nationality Act – commonsense optional forms of relief for individuals in exigent circumstances – and have made them the rule. Now, forum-shopped lower courts are taking these discretionary forms of relief and making them mandatory while ripping up the base statutes that say the exact opposite. In turn, DHS leadership, thus far, has been so overly deferential to this insidious judicial civil disobedience against our laws that they are not even enforcing the laws and processes clearly on the books to deal with all illegal aliens. Why isn’t DHS simply interviewing them the minute they come here, rejecting illegitimate claims, and immediately starting the deportation clock, pending the one appeal they have? Just a few weeks of this will deter the people down the pipeline in Central America, as it did when we implemented a similar policy pursuant to law to deal with the 1989 Nicaraguan wave.

There are some bureaucratic factors involved here. Horowitz continues:

Brandon Judd believes that a lot of the problem is rooted in the bureaucratic divides between numerous agencies. Under our original immigration laws, the entirety of immigration policy was controlled by one commissioner of the Immigration and Naturalization Services, whose agency handled Border Patrol, detentions, deportations, and adjudications. First, after the DOJ restructuring in 1983, and then after the creation of the Department of Homeland Security in 2002, these jobs have been separated between at least four agencies within two different departments. Border Patrol initially apprehends illegal aliens, ICE detains and deports them, and USCIS processes asylum claims. They are all under DHS, but then the rest of the adjudication process is run by the Executive Office of Immigration Review (EOIR), which is still under the Department of Justice. According to Judd, the problem begins right at the entry, when Border Patrol turns over the aliens to other agencies and the deportation clock never begins. The process at USCIS work’s at a snail’s pace. Judd’s idea is to have senior Border Patrol agents conduct the credible fear interviews right on the spot when the migrants enter.

Moreover, a number of asylum adjudicators at USCIS are part of a “deep state” for open borders that does not share the institutional concerns for American sovereignty of those who work for Border Patrol. As Jessica Vaughan of the Center for Immigration Studies explains, “Border Patrol agents are likely to have a very different view of the nature of this mass migration event; being on the front lines, seeing the smuggling, speaking to the migrants, knowing the intelligence on the criminal organizations behind this all gives them a more realistic view of what is happening and why. “ USCIS officials, on the other hand, “fall for the rote fear claims of the migrants,” according to Vaughan. She believes that if Border Patrol agents conduct the initial screening, they could vet the migrants “before American activists can coach them on what to say to gain release.”

“This is especially important in light of reports from whistleblowers at USCIS who say that asylum officers have been instructed by resistant career supervisors to ignore efforts by the Trump administration to return to deciding these cases according to the letter and intent of the law. The USCIS resisters who reportedly have made it known to rank and file asylum offices that all claims must be approved will have no way to impose this seditious mandate on Border Patrol agents, who have a separate chain of command.”

A lot of this is a lack of political will to enforce the laws, not a lack of laws to create the political will. As Judd explained to me in a phone interview, “Unless we use all of the tools under existing authority, we will never solve the illegal immigration crisis. Congress has proven ineffective, and if we place our hopes in them, the border will never be secured.”

So let's get with it, Trump Administration.