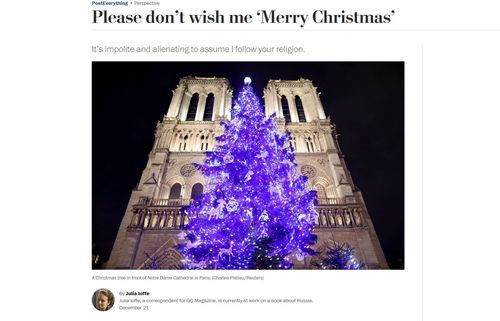 Julia Ioffe, [Email her] is a Russian-Jewish immigrant from the former Soviet Union.

Please don’t wish me ‘Merry Christmas’
It’s impolite and alienating to assume I follow your religion.

By Julia Ioffe
Julia Ioffe, a correspondent for GQ Magazine, is currently at work on a book about Russia.
December 21, 2018

’Twas five nights before Christmas, and my Lyft driver was the umpteenth person to wish me a “Merry Christmas” that day. He probably just meant it the way most people do, as a kind of December shorthand for “have a good day.” But he had a cross hanging from his rearview mirror. I said thank you, wished him the same, got out on my street — decorated with lights and wreaths and nativity scenes — went into my house and sighed.

I like good cheer. But please do not wish me “Merry Christmas.” It’s wonderful if you celebrate it, but I don’t — and I don’t feel like explaining that to you. It’s lonely to be reminded a thousand times every winter that the dominant American cultural event occurs without me. [More]

We've seen Julia Ioffe pontificating on many subjects over the years, including Jason Richwine, the racism of white people who lived near Ferguson, the right of immigrants to get welfare, and the horribleness of Stephen Miller.

Memorably, she's also written on the wonderfulness of the special immigration program that brought her to the US in 1990:

America can — and must — do more to help Europe’s migrants. I’m living proof of why.

As Steve Sailer pointed out, this was after the fall of the Berlin Wall, so there wasn't much point in her being a refugee. And if she had stayed in Russia,  the "dominant American cultural event" wouldn't have bothered her at all, and a Lyft driver in America wouldn't have been subjected to her random bigotry, here a prejudice (Christophobia) that practically doesn't have a name.