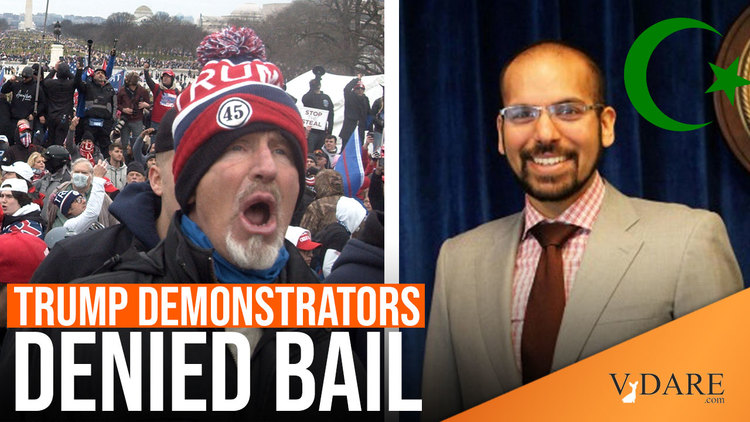 Cash bail has been abolished in many Democrat-run cities, rioters who have been setting fires or beating people with baseball bats are released on their own recognizance, and the Antifa/BLM rioting keeps going on in spite of objections from President-elect Biden ['Smashing windows is not protesting and neither is rioting': White House slams Antifa Portland protests and 'anyone who committed a crime should be prosecuted,' Daily Mail, January 25, 2021].

But one group is being dealt with: white, mostly peaceful protesters who supported President Trump. A Muslim Magistrate Judge has ordered one protester held without bail.

A judge on Monday ordered Couy Griffin — the "Cowboys for Trump" founder charged with participating in the Jan. 6 insurrection [Sic]— to remain in jail pending trial, agreeing with prosecutors that he was a flight risk and posed a danger to the community if released.

Griffin, a county commissioner in Otero County, New Mexico, is charged with one count of illegally entering a restricted area. In other cases where the government has argued for pretrial incarceration for people charged in the insurrection, the defendants have typically faced more serious felony counts, such as assaulting law enforcement or conspiracy. But prosecutors argued that a combination of factors made Griffin a danger, including his threats of violence if he returned to Washington, DC, for President Joe Biden's inauguration — prosecutors quoted him saying "there's gonna be blood running out of that building" in a now-deleted Facebook video — and his refusal to recognize the legitimacy of the election.

Announcing his decision from the bench after hearing arguments, Magistrate Judge Zia Faruqui cited Griffin's threatening statements — prosecutors quoted him previously saying that "the only good Democrat is a dead democrat" — and the fact that after Jan. 6, he hadn't shown remorse and had instead "doubled down" by vowing to go back to Washington. The refusal to recognize the legitimacy of the election, the judge said, meant he couldn't have confidence that Griffin would obey orders if released.

"We all live in a system of rules where we have to follow them, and if we don't, there are consequences," Faruqui said. [More]

Of course, Faruqui isn't only a Muslim, as you can tell from his name, he's an ex-Federal prosecutor. He "served for twelve years as a federal prosecutor in the U.S. Attorney’s Offices in St. Louis and Washington D.C."

The Great Replacement In AmericaKritarchyCapitol Insurrection Hoax
<< Previous
Next >>
LATEST