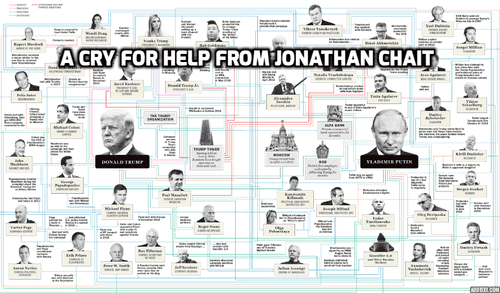 Mental Illness At NEW YORK MAGAZINE: Graphic "Proof" That Trump Has Been a Soviet Sleeper Agent Since 1987

The Finlandization of the United States
By Roger Cohen
Opinion Columnist

MADRID — Over the next week, President Trump will visit Europe to call on allies, get in some golf and then meet President Vladimir Putin in Helsinki. He’ll no doubt feel more comfortable with the Russian leader, whom he considers “fine,” than with freeloading NATO partners who, he says, treat Americans as “schmucks.” …

… The Finlandization of Trump’s United States is pretty much complete. …

Traveling from Madrid to beautiful Segovia the other day, in a line of traffic full of Spaniards fleeing the capital for the weekend, I gazed out on a wealthy country. Spain was poor and under a dictatorship a little more than four decades ago. That’s what the European Union does. It’s a transformative peace magnet delivering democratic stability and prosperity to more than a half-billion people. That’s why the United States has always supported it.

So maybe the wealthy Spain of today should pay a little higher fraction of its defense than the poor Spain of 1978?

A European who visited Trump recently tells me he was shocked by two things: the president’s venom against European allies that don’t buy enough American goods even as they ask the United States to protect them, and his paean to the new xenophobic Italian government that, in Trump’s view, is finally getting with the anti-immigrant program.

Trump’s with Matteo Salvini, the Italian interior minister from the anti-immigrant League party. He’s with Viktor Orban, the Hungarian prime minister who is successfully exporting across Europe his illiberal template for a closed democracy that can produce only one election result.

I.e., under the Orban-Salvini system, the only election result possible, taken at the most abstract level, is the People occasionally electing a new government, which is Bad, in contrast to the Cohen-Brecht system of the Government electing a new and less unsatisfactory people, which is Good.

… The question remains: Why is Trump in Putin’s thrall? He may be compromised, whether by Russian intelligence or money. 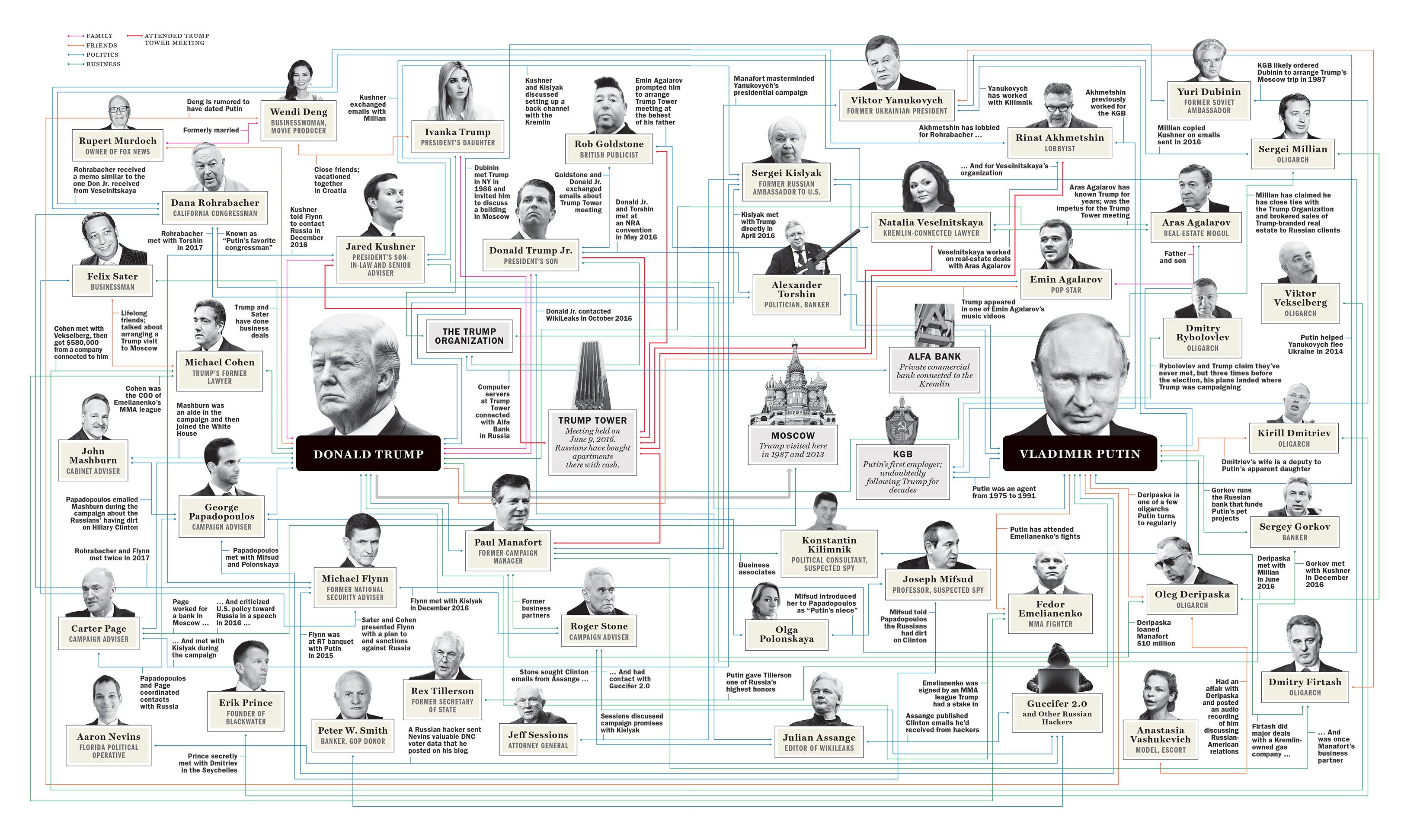 The colored yarn connections prove that Trump has been a deep underground Bridge of Spies-style Moscow sleeper agent since 1987 when the KGB chose him to burrow anonymously into the American hinterland and attract no attention until finally activated by his controllers.

Here’s Chait’s self-image of himself unraveling the nefarious Kremlin plot:

It is often said that Donald Trump has had the same nationalistic, zero-sum worldview forever. But that isn’t exactly true. Yes, his racism and mendacity have been evident since his youth, but those who have traced the evolution of his hypernationalism all settle on one year in particular: 1987. Trump “came onto the political stage in 1987 with a full-page ad in the New York Times attacking the Japanese for relying on the United States to defend it militarily,” reported Edward Alden, a senior fellow at the Council on Foreign Relations. “The president has believed for 30 years that these alliance commitments are a drain on our finite national treasure,” a White House official told the Washington Post columnist Josh Rogin. Tom Wright, another scholar who has delved into Trump’s history, reached the same conclusion. “1987 is Trump’s breakout year. There are only a couple of examples of him commenting on world politics before then.”

And here’s a photo of Chait hard at work in New York Magazine’s secret sub-basement conspiracy-deconstructing lair uncovering the final link connecting Putin and Trump as Chait realizes that the mysterious Pepe Silvia does not exist.

What changed that year? One possible explanation is that Trump published The Art of the Deal, which sped up his transformation from an aggressive, publicity-seeking New York developer to a national symbol of capitalism. But the timing for this account does not line up perfectly — the book came out on November 1, and Trump had begun opining loudly on trade and international politics two months earlier. The other important event from that year is that Trump visited Moscow.

Other events in 1987 included a broad Establishment consensus, epitomized in Yale historian Paul Kennedy’s 1987 bestseller The Rise and Fall of Great Powers, which argued by a wealth of historical analogies, that the U.S. was exhausting itself supporting Cold War allies around the world. (As it turned out, of course, the Soviet Union was exhausting itself even faster.)

In 1985, the Soviet Red Army had 53,000 tanks and 5 million troops in uniform, so there were reasons for the USA to undertake massive defense spending on the Fulda Gap. Still, Professor Kennedy did have a point: rivalry with the Soviet Union was expensive.

Today, the Soviet Red Army isn’t really quite so massive, but everybody knows that the only reason the President of the USA might ask the “now wealthy” Spaniards to chip in some more for their own defense is because Trump has been Putin’s agent for 31 years.

Here’s video of Chait explaining it all:

And here’s an excerpt from the autobiographical screenplay Jonathan Chait is working on: “The Putin-Trump Code and How I Cracked It:”

After all, you can’t put anything past Chait, who was Stephen Glass’s best friend and co-author at The New Republic. In the movie Shattered Glass, Chait’s character was renamed “Amy Brand” and played by Melanie Lynskey: