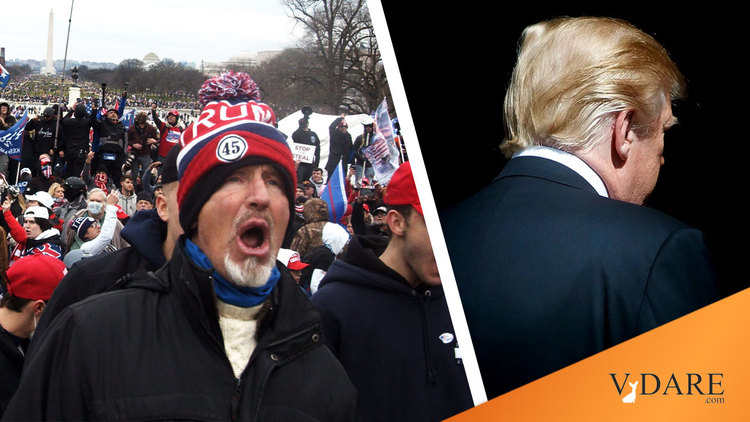 In my podcast last Friday I hailed New York Post opinionator (and frequent Tucker Carlson guest) Miranda Devine, writing last week about the savage treatment being meted out to participants in the January 6th Capitol protest.

In this morning's Post Ms Devine hits another one out of the park on the same topic. I tried extracting a couple of quotes to give you the flavor of the column, but it's uniformly excellent, no part more quotable than any other. Just read the whole thing, please.

Ms Devine touches on a point I haven't seen much aired: Why isn't Donald Trump out front in support of these protesters?

The anarchists who smashed, looted, and burned their way across America all through last summer enjoyed all the bounty of the Soros-Silicon Valley-Wall Street blob, with its legions of bought-and-paid-for prosecutors and attorneys. They were also, of course, cheered on by Pelosi, Biden, Harris, and their media shills.

The January 6th protesters have nothing like that. Even GoFundMe has banned any support for them, thus revealing itself an obedient servant of the blob.

Trump is worth billions. Couldn't he spare some of it to help out with the legal defenses?  CultMarx goes all-out for its supporters, even when they engage in grossly and repeatedly violent and destructive acts. Trump has never lifted a finger on behalf of his supporters.

If Biden has decided we are to become a zero-tolerance law and order nation, there are advantage in a crime-free society if you don't mind writing off everyone who makes a mistake.

But in reality, we are doing the opposite, creating a two-tier justice system that punishes only the political enemies of the left.

It’s as if the Dems want to create a class of people with nothing to lose.