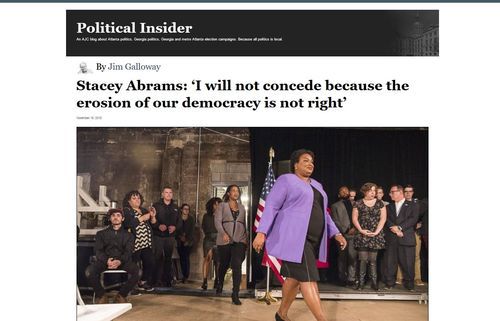 It's Official: Brian Kemp Will Be the Next Governor of Georgia!

Ever since Brian Kemp won Georgia’s gubernatorial election on November 6th, his Democratic opponent Stacey Abrams and her various allies have wailed and gnashed and filed lawsuits in an attempt to overturn the outcome. But on Friday afternoon, Abrams finally acknowledged that Kemp will be seated as the next governor. However, in the long-standing tradition of blacks being horrible sportsmen, she gave a speech saying:

“… to be clear, this is not a speech of concession.

Concession means to acknowledge an action is right, true or proper. As a woman of conscience and faith, I cannot concede. But my assessment is that the law currently allows no further viable remedy.

Make no mistake, the former Secretary of State was deliberate and intentional in his actions. I know that eight years of systemic disenfranchisement, disinvestment and incompetence had its desired effect on the electoral process in Georgia.

Pundits and hyper-partisans will hear my words as a rejection of the normal order. I’m supposed to say nice things and accept my fate. They will complain that I should not use this moment to recap what was done wrong or to demand a remedy. As a leader, I should be stoic in my outrage and silent in my rebuke.

But stoicism is a luxury and silence is a weapon for those who would quiet the voices of the people, and I will not concede because the erosion of our democracy is not right.

Today, I announce the launch of Fair Fight Georgia, an operation that will pursue accountability in Georgia’s elections and integrity in the process of maintaining our voting rolls. In the coming days, we will be filing a major federal lawsuit against the state of Georgia for the gross mismanagement of this election and to protect future elections from unconstitutional actions.” [Stacey Abrams: ‘I will not concede because the erosion of our democracy is not right’, by Jim Galloway, Atlanta Journal-Constitution, November 16, 2018]

I will not do readers the discourtesy of speculating as to what the ultimate consequence of this lawsuit might be. I am not qualified to do so, we’ll just have to wait and see.

Though you may have been somewhat disappointed by the results of the midterms, the fact that two of the South’s most populous states held off black rule is great news. Thanks to everyone who helped make sure that happened through time, money, advocacy, and effort.

Finally, have yourself a laugh at what might be the most ineffective and stupid political lawn sign in the history of mankind, which I “obtained” on election day: 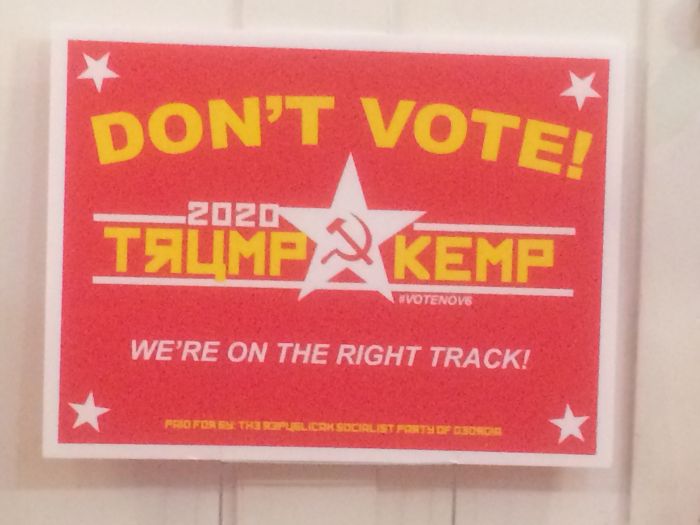