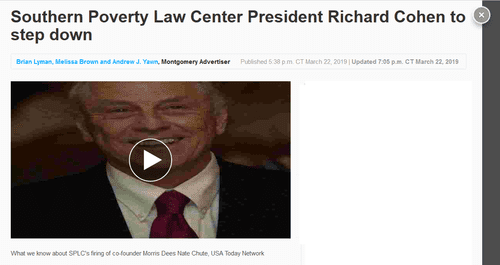 Now Richard Cohen Is Out At The SPLC Too

Southern Poverty Law Center President Richard Cohen said in a statement Friday he has asked the board of the troubled organization to “to immediately launch a search for an interim president in order to give the organization the best chance to heal,” and took responsibility for problems that have swept out the senior leadership of the group in just a week.

Cohen, who has worked at the SPLC since 1986 and served as president since 2003, said in the statement that “we’ll emerge stronger” after an audit of the organization’s practices by Tina Tchen, a former White House official and Chicago-based lawyer.

In iSteve Convergence News, the Chicago cops union is today up in arms over Tina Tchen’s alleged involvement in the Jussie Smollett fiasco.

… On Thursday, Rhonda Brownstein, SPLC legal director and a member of its senior leadership staff, also resigned, a source familiar with the matter confirmed to the Advertiser. …

Several of the employees described staff turnover as high and a “toxic” workplace riddled with conflicting priorities and inter-office politics.

All four independently spoke of racial equity concerns in senior leadership, describing a disproportionate amount of people of color serving in entry-level administrative positions compared to the rest of the workforce.

A review of the center’s 2019 board and senior staff reveals that senior leadership at SPLC remains largely white.

Dees had weathered criticism for decades, with a 1994 Montgomery Advertiser series citing concerns about racial discrimination against back employees. Staffers at the time “accused Morris Dees, the center’s driving force, of being a racist and black employees have ‘felt threatened and banded together.’”

Dees strenuously denied the accusation at the time.

Critics of the center in recent years have drawn attention to SPLC’s behemoth fundraising mechanism.

“His obsession has really been with fundraising,” said Stephen Bright, a Yale law professor and former director of the Southern Center for Human Rights in Atlanta.

… Dees personally raked in nearly $5.7 million in compensation since 2001 according to a review of publicly available tax documents.

That’s really not that much in official compensation for a man of Dees’ fame, especially one with four ex-wives. Looking at photos of the fifth Mrs. Dees’ interior decorating, Morris clearly owns a lot of shiny gewgaws.

Now that it could be that Morris spends money on all that stuff, which could add up to a lot. But my guess is that Morris gets a lot of Lifetime Achievement Awards that come with some kind of objet d’art to decorate his compound back home in Montgomery, which serves as Morris’s museum to Morris.

For example, the Ronald Reagan Museum has an exhibit of just a few hundred of the countless thing-a-ma-bobs that foreign countries and admirers gave to President Reagan. My guess is that Nancy Reagan probably took the most exquisite, say, 5% home to decorate her Bel-Air mansion, and left the vast remnant of lesser stuff to the Reagan Museum.

But Morris seems like the kind of guy who would like to take his awards and gifts home and put them up on the walls. And if his wife gave him a hard time about how tasteless some of the stuff is, well, he could always get a sixth wife.

The SPLC is America’s most lucrative hate group.