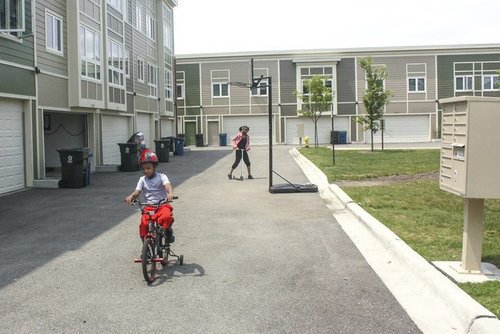 ATLANTIC: "How Chicago Is Trying to Integrate Its Suburbs"

The Atlantic explains how Chicago Mayors Richie Daley and now Rahm Emanuel, out of the goodness of their hearts, have helped Chicago’s suburban neighbors share in the vibrancy of diversity. Mayor Daley had to tear down the Cabrini Green housing project on the Gold Coast because it was so isolated from jobs and public transportation. Now, Mayor Rahm Emanuel is helping poor blacks out, right out of Chicago.

How Chicago Is Trying to Integrate Its Suburbs

The city, long divided into black and white neighborhoods, is asking affluent counties to pitch in.

… The collaboration began in 2002, when the Chicago Housing Authority and the housing authorities of Lake and Cook Counties created a collaboration called the Regional Housing Initiative (RHI). Its goal was to spearhead the construction of affordable housing in “opportunity areas,” which are essentially middle- or upper-income neighborhoods with good schools and safe streets. Today there are nine public housing authorities that participate in the collaborative.

Here’s how it works: Through the Regional Housing Initiative, the housing authorities pool a portion of their Section 8-voucher funds and use that money to subsidize the construction of affordable developments in areas with a low poverty rate, a high homeownership rate, good schools, and access to jobs. The Section 8 units in those developments are then accessible to voucher-holders from all of the participating counties, and many of the other units are set aside for low-income people.

Typically, small counties and towns don’t have enough voucher funds to underwrite projects like these developments—before the collaboration, no suburban housing authority in Chicago had built affordable housing with voucher funds. Chicago, on the other hand, has the most vouchers in the region by far, but does not have many options for new housing in safe, high-opportunity neighborhoods.

None, I tell you, none at all.

By pooling resources and allowing voucher-holders to move across the entire area, the Regional Housing Initiative has given poorer people access to towns and communities they would have otherwise been excluded from. ..

The program has helped people like Denise Boyd, who lived in the North Side of Chicago, in an apartment building that she said got a little too busy at night. When she got off the Section 8 waiting list two years, ago, she says, she was skeptical about the idea of moving to Glenview.

Her kids liked the Chicago school they were in and had friends there, and Boyd goes to church frequently and didn’t like the idea of a 45-minute drive, or more, just to get to church.

But then she visited Glenview and loved the trees and flowers in the Glenview building, which has a community garden and a big lawn. The stores are nicer in Glenview, she said, and the schools are excellent, too.

“Adults have to realize, when you have kids, it’s all about your children now,” she told me. “You have to make sure your children are happy and safe.”

While RHI has been effective at convincing both suburban and urban housing authorities to participate in the program, other factors helped too. For example, the recession of 2008 meant that developers had parcels of land that they couldn’t offload, and were amenable to selling them to people interested in building affordable housing for fair prices.

Real estate developers are sensitive social justice warriors, too, at least when times are tough and only the government is writing checks.

The recession also meant that many municipalities were looking for ways to encourage building on land that had once been zoned for manufacturing or business. The town of Crystal Lake, for instance, changed some zoning laws during the recession to allow the construction of certain apartment units, and the town now has a 60-unit development—many of which are affordable—complete with a pool, volleyball courts, and an exercise center.

Before the Crystal Lake project was built, suburban residents worried that affordable housing would look like Cabrini Green, Claussen said. But now that affordable units have been built through the Regional Housing Initiative, residents have been complimenting the townhouses going up, not even knowing the units are for low-income residents.

In other words, the local powers that be weren’t in any hurry to mention to local residents what they were up to.

“It’s a great way to show that affordable housing isn’t just a warehouse of poor people,” she said.

Housing advocates have long debated the merits of moving low-income families from high-poverty urban areas to suburbs like Glenview. The move can be challenging for families, who leave behind family and friends and enter a new, affluent world. But the research is increasingly conclusive: Living in a “good” zip code dramatically improves kids’ chances of going to college, getting a good job, and escaping poverty.

And yet, it can be hard to convince voucher-holders to move to the suburbs. Boyd worried that she would face racism, and that her children wouldn’t like being among only a handful of black kids at their school. Boyd says the move was difficult—her kids miss their friends, and Boyd’s own friends who use public transit never come out to visit, because it’s so difficult to get to Glenview. She still hasn’t found a church she likes—the ones in Glenview are “Catholic or Matholic or who knows what,” she joked. (To help with these sorts of difficulties, the Regional Housing Initiative is testing a program that will give voucher-holders money to move to high opportunity areas, and should have some results by the fall.)

But Boyd, who has a disabled son, says all of those obstacles are nothing compared to the piece of mind she’s gotten living in a quiet area with good schools. The move might have been difficult, but it will lead to better life outcomes for her children, she said.

Boyd now joins the ranks of hundreds of low-income Chicago families who have helped test new housing strategies. For half a century, Chicago was a prime example of how housing policy could perpetuate segregation. Its public-housing authority built new complexes in predominantly black areas as white areas refused to approve new public housing, a practice that led to a lawsuit in 1969. As part of a settlement, the Gautreaux program moved more than 3,000 black families to the suburbs. Later, a program known as Moving to Opportunity sought to do the same thing. But when studies raised questions about the effectiveness of these programs, they ended.

Instead, the majority of families lived in complexes not all too different from the infamous Cabrini Green, and when that was dismantled, they moved to other majority-black, low-income neighborhoods.

Because Cabrini Green was so far from all the jobs.

For example, Cabrini Green was a 20-minute walk from the landmark Drake Hotel on Michigan Avenue’s Magnificent Mile across Lake Shore Drive from the Oak Street Beach.

You may have somehow gotten the impression that tearing down Cabrini Green was all about driving out poor black people from right next to the Gold Coast to add billions to local property values. But, it turns out, it was really about Chicago generously Sharing Diversity with deprived suburban municipalities.

But by 2002, business leaders and suburban mayors were recognizing that the segregation of low-income residents in the urban core was holding back the region’s economy. Companies located in the suburbs couldn’t find entry-level service workers, and when they did, those workers would have hours-long commutes through heavy traffic, and would have problems getting to work in inclement weather.

So, Mayors Daley and Emanuel have been graciously permitting suburbs to benefit from their diversity ever since.