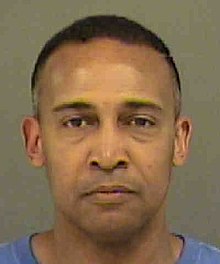 When Patrick Cannon, the Mayor of Charlotte, was arrested and charged with accepting bribes, many conservative Tweeters responded with "name that party." Name that party is a game that conservatives play, similar to VDARE.com's investigations of "Not Reporting Race".

Cannon is a Democrat, and the MSM, 90 percent Democrat, is reluctant to put that fact in a headline. Sample protesting tweet, via Twitchy.com:

Democrat Mayor of Charlotte, Patrick Cannon, a Democrat, arrested on corruption charges. He is a member of the Democratic Party.

You do not, after all, get many "colorblind" black mayors in Southern cities. I can testify that Cannon is "racially conscious"—he's the man largely reponsible for shutting down the 2011 American Renaissance Conference.

In Jared Taylor's press release, Jared explained that the Charlotte Sheraton had  cancelled their contract:

On January 25, the Sheraton sent us a one-line e-mail message saying that because of "recent disclosures as to the nature of your event" they were breaking their contract. Since then, they refuse to speak to us. The pretence that it did not know what might be discussed at an AR conference is a pathetic, embarrassing lie.

Perhaps what the Sheraton actually found out was that Patrick Cannon, Mayor Pro-tem of the city of Charlotte, does not want AR to come to Charlotte. In an e-mail message to a constituent he wrote: "I have all hotels, motels, and gotels [sic] on notice and they seem to be cooperating well still." The date of this e-mail was January 25, the very day the Sheraton canceled its contract.

[Jared Taylor's Press Release: "An Appeal to the City of Charlotte and to Mayor Pro-tem Patrick Cannon", January 31, 2011]

We still haven't figured out what "gotels" are. Anyhow, that's the kind of guy Patrick Cannon is, and it's unsurprising that he's corrupt as well as thuggish. (See Uninvestigative Journalism—The MainStream Media And Minority Politicians for more cases.)

But I wonder if the tweeters rounded up by Twitchy.com even notice this aspect of it.