Chinese Naked Officials are corrupt bureaucrats and Communist Party senior members in the People's Republic of China who amass millions of dollars but then flee to the West or specifically to the United States, when exposed or when they cross a fellow naked official with more power than they, as there are no officials who are not corrupt in China.

Chinese immigrants to the Golden Mountain have brought that corrupt behavior with them, and San Francisco is cursed by their presence.  But in a modern trend, the corrupt officials combine it with anti-white racism and Third World colonialism.  Chinese officialdom is historically and notoriously corrupt and Chinese immigrant politicians in the United States follow the example of their home country, such as the notorious Yan Song or a myriad of other corrupt mandarins in Chinese history.  It is said the destructive Yellow River was China's sorrow, but corrupt officials were its true sorrow.

In that tradition, China's diaspora in California follows the example of Chinese officials like He Shen,  Leland Yee, California State Senator and immigrant from China, who was poised to become California's Secretary of State, where he would undoubtedly aid other immigrants, legal and illegal, to illegally vote in California elections, was arrested for corruption and illegal gun dealing.

State Sen. Leland Yee was arrested on public corruption charges Wednesday after authorities said he solicited money from undercover FBI agents for his current campaign to be secretary of state, promising to use his role in Sacramento to help the federal moles in return for the cash.

Yee, a Democrat who represents half of San Francisco and most of San Mateo County and made gun control a signature issue, participated in multiple explicit discussions with an undercover agents about facilitating a gun-trafficking deal in exchange for campaign donations, the FBI said.

Jackson, black, and also a Democrat, was an interesting aspect of the case. It's almost as if the writers for Sons of Anarchy (SOA), a television show about a white motorcycle gang dealing in illegal guns, were using Lee and his co-conspirators for their inspiration; Chinese gangs, black politicos, and east coast mobsters all make their appearance in SOA scripts. Jackson acted as a consultant to Chow's organization, authorities said, and brokered the campaign contributions to Yee. He is also accused, along with his son, Brandon Jackson, and another man, of conspiring to commit a murder-for-hire scheme initiated by an undercover agent.

Jackson and his son also sold guns and ballistic vests to an undercover FBI agent who posed as an East Coast member of La Cosa Nostra, authorities said. The agent was so successful in infiltrating the group that he was inducted as a consultant to the organization in March 2012, Pascua wrote.

The most interesting character is another Chinese immigrant, Raymond "Shrimp Boy" Chow, born Kwok Cheung, aka Raymond Kwok Cheung Chow, a notorious Chinatown gangster who remained in the United States after several felony convictions, but was never deported, though released by the Federal government to walk the streets despite never finishing his 25 year sentence in one conviction. 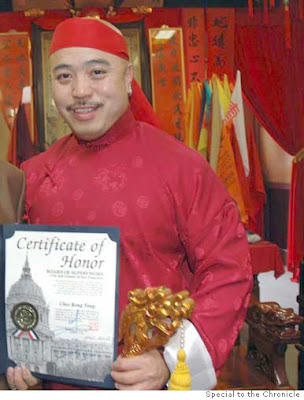 Note the Certificate of Honor, which was a presentation from the Mayor of the City of San Francisco, Ed Lee, son of an illegal alien from China and shepherded through the City Council by another child of Chinese immigrants, Fiona Ma.

Chow was subsequently convicted of gun charges and sentenced to 25 years in prison. In 2003, however, he was released after he cut a deal with the government to testify against a high-ranking associate. And in recent years, Chow has insisted that he had turned his life around, touting his connections to - and awards handed out by - San Francisco politicians.

On his Facebook page, Chow proudly displayed a certificate of honor given to him by Mayor Lee that honored him "for his tenacity and willingness to give back to the community and working 'in the trenches' as a change agent." In a letter, U.S. Sen. Dianne Feinstein recognized him for the same award.

Assisting illegal aliens was one of Yee's obsessions, not only sponsoring legislation for in-state tuition for illegal aliens, assisting the illegals to remain in the United States, but also he sought to enable them to vote by allowing online voter registration.

He has promised to "increase government transparency, support small businesses, reform campaign financing and protect the most vulnerable." He has portrayed himself as a vanguard on issues of political reform, and last year pushed legislation that launched California online voter registration.

Also in 2012, Assemblyman Tom Ammiano, D-San Francisco, bestowed a "change agent" award upon Chow, and San Francisco Mayor Ed Lee gave Chow an award recognizing his "willingness to give back to the community."

Of course, Ammiano lies about the connection, apparently giving out awards to felons escapes the notice of him and his staff.

"We celebrate your tenacity and your exceptional service as a valued member of our community," the certificate from Ammiano says. "Your efforts to turn your life around and help others to do the same have been an inspiration to us all."

The failure of the Bush, Clinton, and Obama Regimes to deport Chow was the result of serious political influence being exercised on Chow's behalf by racist, corrupt, and deviant politicians.

It is also interesting in that Yee was a radical racist who targeted whites for discrimination through affirmative action and sought to disarm California's white population through gun bans.

In an interesting aside, another corrupt San Francisco politician was able to avoid arrest and removal from office for corruption by playing the race card, which will undoubtedly be Yee and Chow's go-to strategy.

SAN FRANCISCO — A San Francisco Ethics Commission resolution calling for Public Utilities Commission Deputy General Manager Juliet Ellis to be fired over her admitted conflict of interest for awarding a $200,000 contract to a nonprofit she also headed has died amid an avalanche of racism accusations. "I had no idea who she was [e.g. a very light skinned black, pictured right.] had never met her (and) didn't know her race," said Commissioner Peter Keane, the resolution's stunned sponsor, who is also the city's onetime assistant public defender and a longtime progressive voice in San Francisco politics.

Keane tossed in the towel Monday after a parade of testimonials on Ellis' behalf by mostly African American friends and colleagues - including her boss, PUC General Manager Harlan Kelly, and Oakland City Administrator Fred Blackwell.

But some also leveled accusations of racism and hidden agendas. Among the flame-throwers were San Francisco NAACP President Rev. Amos Brown, Bayview trucker and activist Charlie Walker, and CNN commentator Van Jones, founder of the Green for All nonprofit that was awarded the since-canceled contract. The nonprofit promotes green jobs for minorities.

Time for Yee to play the race card.  It should work.  It also kept Shrimp Boy from being deported.  Just ask Dianne Feinstein.