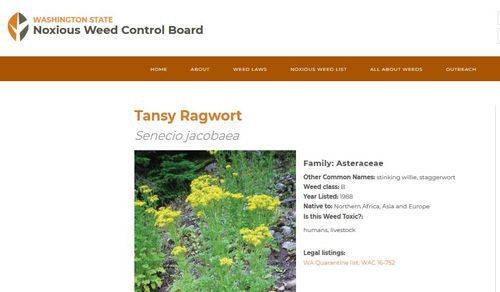 Invasive Plant Species Should Be Called Illegal Aliens—Is That Racist? Invasive plant species should be called illegal aliens. Is that racist?

John Derbyshire's poison ivy misery (his recent Radio Derb describes him as "having trouble recording, speaking, writing, moving about, or doing anything, being currently around sixty percent calamine lotion by body weight") reminds me that here in Washington State where I live on an island, we have neither poison ivy nor poison oak. We do have what our state officials call noxious weeds.

One of these weeds is Tansy-ragwort (right) which is native to North Africa, Asia and Europe. Who knows how it invaded our country? It poisons livestock and is also poisonous to humans who may dine on contaminated meat in the food chain.