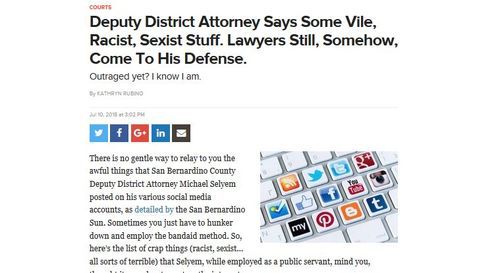 A prosecutor in San Bernardino, California is in trouble with the thought police for some unremarkable commentary.

Deputy District Attorney Says Some Vile, Racist, Sexist Stuff. Lawyers Still, Somehow, Come To His Defense.
Outraged yet? I know I am.

ATL writer Kathryn Rubino—no doubt like every other white-hating ATL writer, with the possible exception of editor David Lat—thinks he should be fired. [Tweet Ms. Rubino.]

(I confess amusement about the spectacle of Above the Law, which puts half its energies into gossip about the impossibly privileged, very white world of big law firms and the decidedly non-social justice-oriented obsession with associate salaries, and the other half into left-wing white bashing.)

But nobody else seems moved by the prosecutor's remarks.  He has not been fired.  The incoming DA called his comments 'salty.'

And a courtroom adversary called him 'disciplined and ethical'.

Prosecutors, like anyone else, have free speech rights.  Actually, they've got better protection than most, because they're public employees.

Like police officers, it's tricky for them because the left and the media already think they're racist, so when they say "race realist" things, they catch more heat than, say, an insurance adjuster.

I recall the case of a New York prosecutor who attended an American Renaissance conference and (gulp) went on record with a reporter about it.  When the Heidi Brigade came down on him, he agreed to resign.

I would like to turn the tide on the phenomenon of being fired for Talking While White.

Because it isn't just free speech that's at stake—it's actually the civil rights of whites, which have even greater protection under the law.

To understand what I mean, consider the case of a black employee fired for complaining about anti-black racism.  He may not have a free speech defense, but he could certainly argue that by engaging in advocacy speech on behalf of his own racial group—and then getting fired for it—his right against racial discrimination was violated.

The same reasoning, of course, applies to whites.