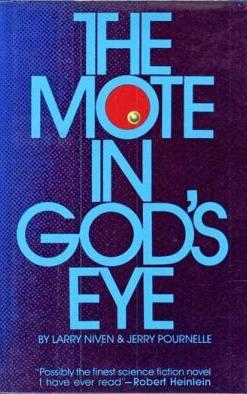 Inside a Billionaire’s New Interstellar Mission

Yuri Milner is spending $100 million on a probe that could travel to Alpha Centauri within a generation—and he’s recruited Mark Zuckerberg and Stephen Hawking to help. In an interview with ​The Atlantic, Milner makes his case for star travel. …

When he started reviewing mission concepts, he was surprised to find a steady drumbeat of support for a “light-sail,” a large reflective sheet that could reach cosmic speeds, when pushed with a powerful laser beam [back in the Solar System].

This is pretty much the concept the aliens use for interstellar travel in the 1974 sci-fi novel The Mote in God’s Eye by Larry Niven and Jerry Pournelle.

In the novel the laser cannon–>light sail system is so expensive that it nearly bankrupts the alien world, which causes even more political turmoil among the Moties than is usual.

The Russian zillionaire (who says he is named for cosmonaut Yuri Gagarin) wants the probe to be shrunk to tiny size, thus reducing the energy costs. I didn’t see any discussion in The Atlantic of how to stop the probe when it gets to Alpha Centauri, which is a general problem in thinking about interstellar travel: you think up a clever way to accelerate, but then you need to come up with an even cleverer way to decelerate unless you just want to fly-by like a bat out of hell.

The Mote in God’s Eye can serve as an immigration policy allegory.

A half-dozen centuries in the future, humanity has stumbled into a fortuitous discovery of a faster than light interstellar travel technology and spreads out across the habitable planets of the galaxy, never encountering any other intelligent life.

Then a slower-than-light spacecraft driven by a light sail arrives from an unexplored solar system.

Our Space Navy goes to visit the planet that sent it and discovers a civilization that seems as advanced as ours, except they don’t have our faster-than-light travel technology, so they are stuck in their solar system, except for sending out the occasional expensive probe. We can visit them, but they can’t visit us.

The book then turns into an ecological detective story as a few suspicious Earthlings try to unravel the complex story of the Moties’ nature before diplomacy gets too far advanced to put the brakes on proposals such as sharing the FTL drive with the aliens in the name of interstellar harmony and goodwill. We wouldn’t want to be seen as speciesist, now would we?