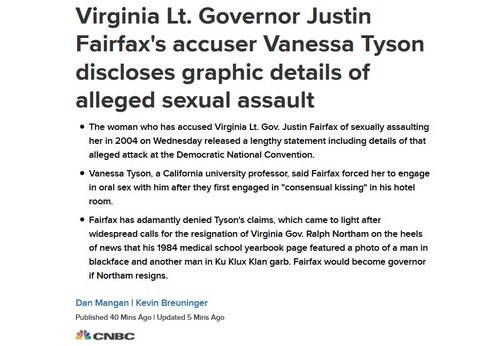 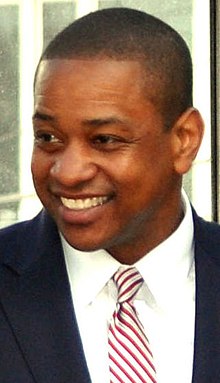 They were both Democrats, and desperate to prevent a conservative Republican from being appointed to the Supreme Court, which is, the view of Democrats, a bulwark of Leftism against any actual democracy. (In addition, Anita Hill may have viewed Thomas's conservative judicial principles as akin to racial treason—many black Democrats feel that way.)

But Vanessa Tyson, the woman who says that she was sexually assaulted by Justin Fairfax at the 2004 Democratic Convention, is just as much a black Democrat as Fairfax himself. That's why they were both at that convention. (Note: the attack, if thought credible by Boston or Massachusetts State Police could still be prosecuted under Massachusetts law.)

The woman who has accused Virginia Lt. Gov. Justin Fairfax of sexually assaulting her in 2004 on Wednesday released a lengthy statement [Read it here] including details of that alleged attack at the Democratic National Convention.

Vanessa Tyson, a professor at Scripps College in California, said Fairfax forced her to engage in oral sex with him after they first engaged in "consensual kissing" in his hotel room in Boston. Both were working at the convention at the time.

Fairfax has adamantly denied Tyson's claims, which came to light after widespread calls for the resignation of Virginia Gov. Ralph Northam on the heels of news that his 1984 medical school yearbook page featured a photo of a man in blackface and another man in Ku Klux Klan garb. Fairfax would become governor if Northam resigns.

Fairfax has said his sexual encounter with Tyson was "100 percent consensual."

But Tyson said it was not that at all.

"As I cried and gagged, Mr. Fairfax forced me to perform oral sex on him," Tyson wrote in her statement, issued by a law firm now representing her.

"I cannot believe, given my obvious distress, that Mr. Fairfax thought this forced sexual act was consensual. To be very clear, I did not want to engage in oral sex with Mr. Fairfax and I never gave any form of consent. Quite the opposite. I consciously avoided Mr. Fairfax for the remainder of the Convention and I never spoke to him again."

Tyson also accused Fairfax of engaging in a "smear campaign" against her by his pointing reporters to 2007 video in which she discussed being a victim of incest, but did not mention an attack by Fairfax.

"In that video I did not talk about being assaulted by Mr. Fairfax. This, of course, is not proof that he did not assault me," Tyson said. "His reliance on this video to say the opposite is despicable and an offense to sexual assault survivors everywhere."

"Since October 2017 when I first began telling friends about the assault, I have never wavered in my account because I am telling the truth. I have no political motive. I am a proud Democrat," Tyson said. "My only motive in speaking now is to refute Mr. Fairfax's falsehoods and aspersions of my character, and to provide what I believe is important information for Virginians to have as they make critical decisions that involve Mr. Fairfax."

Tyson's attorneys at the law firm of Katz, Marshall & Banks earlier represented Christine Blasey Ford, the woman who claims that Supreme Court Justice Brett Kavanaugh sexually assaulted her at a high school get-together in the early 1980s in Washington, D.C.