Indians Are Disappointed with Americans’ Choice of Donald Trump as President

There’s a certain kind of America-bashing that should be welcomed as positive, exemplified by Monday’s New York Times article that described America as a “land of lost opportunity” for Indians who now feel disenchanted about possible immigration. Apparently we’ve become a horrible racist nation since Donald Trump was elected president: the Times says Indians are shocked at a “wave of racist violence” — consisting of one murder, which while awful, is not quite a “wave” and the fear described by Indians seems overblown.

(Interestingly, it’s reported that Africans residing in India don’t feel safe there and encounter “racism at every turn.”)

What a rapid transformation. For years, Indians couldn’t wait to immigrate here and perhaps get a job in tech even when it meant working cheap as an H-1b to replace America workers. Now we’re not good enough for them. Oh, well!

Indians have a decent rep as immigrants because many are hard-working and don’t tend to rob Seven-Elevens. But as I wrote in a 2007 Vdare article (Dogs, Frogs and Dalits: The Indian Model Minority Has A Dark Side), there are problems. One is sex-selection abortion because Indians don’t value girls. Even though India made the practice illegal in 1994, it continues, and one NGO estimates that five to seven million sex-selective abortions are performed in India every year. As a result, the gender ratio is 89 females to 100 males, and a number of men cannot find a wife.

Another cultural practice that’s a bad fit in America — where we strive for an egalitarian society — is the discriminatory caste system. One quote from my 2007 article spoke volumes about snotty arrogance:

Caste in America is justified into more acceptable terms, like the computer programmer quoted by the NYT as saying, “That’s why I went into the Brahmin group, because I wanted to give my children the same values.” But the fact remains that Indians come to America, a society with minimal class distinctions, and see no problem with bringing their discriminatory caste system with them.

So if Indians don’t immigrate to America, that’s not a bad thing at all. Citizens have gotten tired of the oppressive diversity hectoring from elites and seeing their communities transformed into something foreign. That attitude is a big reason why Donald Trump was elected.

America could use a long time-out from immigration because we have plenty now, thanks anyway. Not to mention that automation will be doing an increasing amount of the work in coming years, so immigration really should be retired. 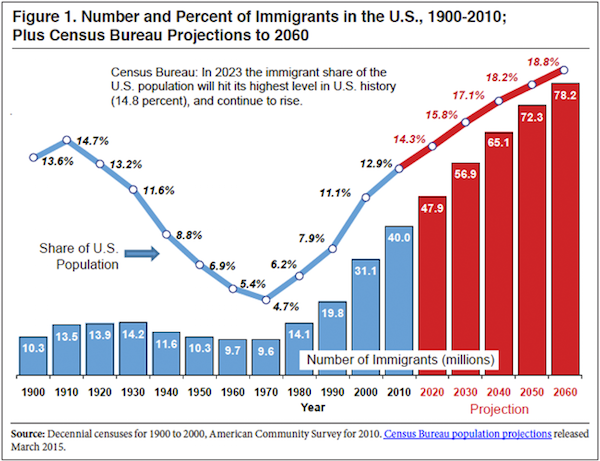 MUMBAI (NYTIMES) – Generations of Indians have admired the United States for almost everything. But many are infuriated and unnerved by what they see as a wave of racist violence under President Donald Trump, souring the United States’ allure.

The reaction is not just anger and anxiety. Now, young Indians who have aspired to study, live and work in the United States are looking elsewhere.

“We don’t know what might happen to us while walking on the street there,” said Kanika Arora, a 20-year-old student in Mumbai who is reconsidering her plan to study in the United States. “They might just think that we’re terrorists.”

Recent attacks on people of Indian descent in the United States are explosive news in India. A country once viewed as the Promised Land now seems for many to be dangerously inhospitable.

Further alienating Indians, especially among their highly educated class, is the Trump administration’s reassessment of H1-B visas given mostly for information technology jobs. More than 85,000 are granted a year, the majority to Indians.

This year, undergraduate applications from India fell at 26 per cent of US educational institutions, and 15 percent of graduate programs, according to a survey of 250 US universities by the American Association of Collegiate Registrars and Admissions Officers.

The number of applications for H1-B visas also fell to 199,000, a nearly 20 per cent decline, according to data kept by U.S. Citizenship and Immigration Services.

Like many others, Indians were offended by Trump’s promises to block the Mexico border with a wall and bar people from six predominantly Muslim countries. Some took solace that India was not targeted.

But they soon saw that anti-immigrant rage in the United States did not discriminate.

In February, two Indian immigrants were shot, one fatally, at a bar in Kansas by a man who witnesses said had shouted ethnic slurs and told them they did not belong in the United States.

About 3.2 million people of Indian descent live in the United States, slightly more than 1 percent of the population, a Pew Research Center report found.

Most hold green cards and H1-B visas, and are far more affluent and educated than the average American.

Indian-Americans play an outsize role in Silicon Valley, where some, including Google Inc.’s chief executive, Sunder Pichai, have founded or run some of the most successful companies.