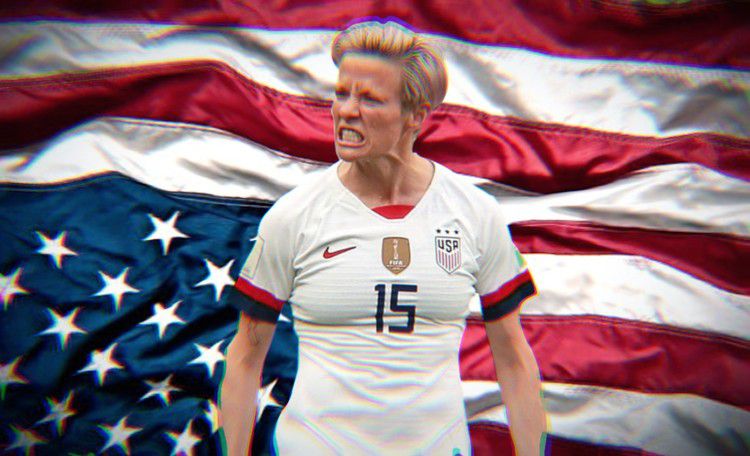 In Which America’s Women’s Soccer Team Wins A Victory Over… America?

(Of course, the U.S. women’s team was also defeated a couple years ago by a group of under-15-year old boys, as Ann Coulter reminds us) [FC Dallas under-15 boys squad beat the U.S. Women’s National Team in a scrimmage, by Roger Gonzalez, CBSSports, April 4, 2017].

For whatever bizarre reason, Megan Rapinoe declared the team would not visit the White House, to the cheers of the Main Stream Media. President Donald Trump graciously congratulated the team nonetheless [Trump, putting aside Rapinoe’s attack, congratulates women’s soccer team on World Cup win, by Gregg Re, Fox News, July 8, 2019]. This didn’t stop Rapinoe from going on a weird rant at the New York City celebration today about the need to oppose “hate” and how there were homosexuals on the team [In victory speech, Megan Rapinoe calls on Americans to ‘love more, hate less,’ by Rebecca Klar, The Hill, July 10, 2019].

Though she bragged about racial diversity as well, the team isn’t all that diverse. It even has a literal Becky. (It’s more diverse than it was in the past though).

Who exactly is Rapinoe attacking here? Was there some movement to ban homosexuals from the national team that we all missed?

President Trump has hardly been an opponent of homosexual rights. He even made a point of waving a rainbow flag during the campaign. Yet because the goal-posts keep moving, he is still called a “hater.”

Nor are Trump voters furious that America’s own national team won the game. Most likely just feel a vague benevolence and not a huge amount of interest, like Americans generally do about soccer.

The team has not behaved as gracious victors, twerking, mocking their opponents, and briefly tossing the American flag on the ground and stepping on it. [Megan Rapinoe on Alex Morgan’s Tea-Drinking Celebration: ‘We Work Hard, We Like to Play Hard, by Marianne Dodson, Daily Beast, July 3, 2019]

The latter was reminiscent of when German Chancellor Angela Merkel disgustedly removed her country’s flag during a victory celebration, shaking her head in disapproval.

Journalists of course think this is great and are mocking anyone slightly disturbed at the national flag being thrown to the ground [Some conservatives are now angry at Megan Rapinoe because she dropped the American flag, by Jason Le Miere, Newsweek, July 8, 2019]. It wasn’t simply “dropped” but casually tossed down so they could mug for the camera.

(Good thing it wasn’t a rainbow flag; they’d probably be stripped of their title.)

Again, no examples of “Trump fans” supposedly owned by this are given. No one cares. But this narrative of persecution is perpetuated.

It’s also reminiscent of Pete Buttigieg claiming that his sexual orientation is an amazing victory over Vice President Mike Pence, when the record shows Pence has said nothing but nice things about the mayor for years. [After weeks of trashing Pence for woke points, Buttigieg dodges questions about the whole act, by Becket Adams, Washington Examiner, April 23, 2019] The entire issue was fake.

The U.S. Women’s Team deserves congratulations. But their behavior reflects deep insecurity. The fans chanting “equal pay” do as well. This desperate search for victim status is pathetic as is the repulsive mix of gloating and whining.  No one is actually opposed to them, and yet they are acting like they are civil rights heroes overcoming the dark forces of Trumpian nationalism.

In fact, most conservatives, gentle souls that they are, would like to rejoice in their victory as well—except they are being implicitly told they are haters, racists and bigots. They are also apparently “far right” lunatics because they don’t like the flag being trampled. Instead of the national team defeating the rest of the world, it is acting like it defeated red-state America.

Even the bare minimum of civic nationalist symbols like the flag or the anthem—are too much for leftists. It’s not surprising the data reflects a staggering decline in patriotism among Democrats. [American Pride Hits New Low; Few Proud of Political System, by Megan Brenan, Gallup, July 2, 2019]

To the U.S. Women’s Team—yes, we get it, you can play soccer well. No one is angry about this. We would be glad if you weren’t acting like lunatics. Good work, take your trophy, conduct yourselves like adults, and be grateful you won the title while women’s sports is still a thing.